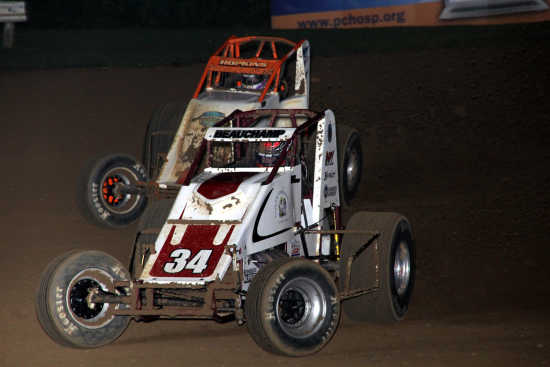 Brent Beauchamp (No. 34) and AJ Hopkins battled for the lead over the last half of the sprint car A-main on Saturday night at Lincoln Park Speedway. Beauchamp passed Hopkins for the lead with two laps remaining and held him off for the victory. (Banner Graphic/CAREY FOX)

PUTNAMVILLE -- There was a mix of first time and repeat winners at Lincoln Park Speedway Saturday evening.

For Steve Peeden, victory lane has become sort of old hat as he started on the pole and finished out front for his ninth win at LPS in the UMP Super Stock division. However, for several other drivers there was some genuine sense of joy as they made their first, ever trip following an A-main win.

Chucky Walden recorded his first career victory in the second bomber feature of the night following Carlos Bumgardner Sr. picked up the opening bomber win of the evening. Mathis, Ill. driver Nate Zimmer hadn't been to the Putnamville oval since the 2012 "Patriot 100" race for UMP Modifieds. However, he tuned up for this year's edition by dominating the second half of the race for a victory over Roger Mills. Brent Beauchamp was able to make the final lead swap with two laps remaining to get past AJ Hopkins for the sprint car win on Saturday night. 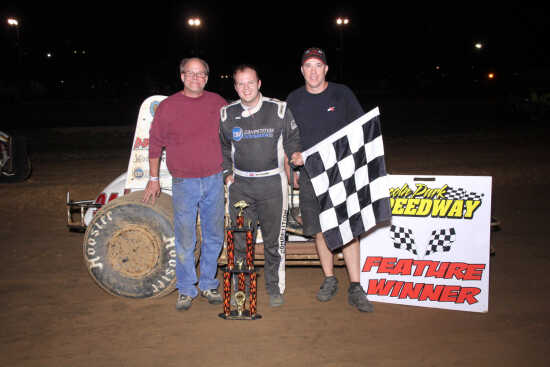 Brent Beauchamp swapped the lead twice over the last three laps of the sprint car A-main before capturing the victory on Saturday night. (Banner Graphic/CAREY FOX)

Jarett Andretti started on the outside of the front row and had designs on his first career win at LPS in sprint cars. In fact, Andretti was out front of a hard charging pack of drivers for the first 10 laps of the 25-circuit A-main. However, the competition was closing fast as the leaders hit lapped traffic on the eighth lap. Andretti and Beauchamp were wheel-to-wheel for the lead when the caution flew on lap 11.

Beauchamp and Max McGhee were fast on Andretti's tail tank with AJ Hopkins in the mix along with Mitch Wissmiller and Scotty Weir. A lap 15 caution re-set the field and gave Hopkins the shot that he needed.

When the field went green, Hopkins had the hammer down around the top of turns one and two before Weir came to a stop in turn two. Beauchamp had snagged the lead just before the caution and held on to that advantage when the field went green once again. Hopkins rocketed into second-place on the cushion and made the pass with three laps remaining. Not to be denied however, Beauchamp came right back with a slide job for the lead that stuck as he used the cushion to stay on the throttle. From there, Beauchamp picked up the win ahead of Hopkins, Andretti, Wissmiller and McGhee. Brazil's Nate McMillin placed sixth.

Rory Riley and Zimmer stared on the front row of the UMP Modified A-main and the two battled for the point over the first couple of laps. Zimmer got by as Jay Humphrey Jr. gave chase before a spin sent him to the back of the field and brought out a caution flag.

On the re-start, Zimmer had Mills to deal with for several laps after the Bloomingdale, Ind. driver advanced from a sixth-place starting spot. Zimmer would break free of the lead pack and continue to build on his advantage as Mills tried to gain ground. Behind him, Richie Lex was piloting a rocket ship in the No. 7x machine. After winning the B-main and starting 16th in the A-main, Lex wasted little time in getting to fifth by lap 10. Kenny Carmichael Jr. and Roy Bruce Jr. kept him at bay until lap 15 when Lex took over third ahead of Bruce and Cullen Goodman.

Lex simply ran out of laps in his challenge for a shot at the lead as Zimmer simply had too big of an advantage at the checkered flag. Mills took second as Lex finished third ahead of Bruce and Goodman. Humphrey Jr. came all the way back up to place eighth.

In the UMP Super Stock feature, the front runners remained mostly the same as they started with no drivers allowing an opening for the field to catch them up front. Peeden started and stayed out front as second-place starter James Walters went to the pits with mechanical problems. Brazil's Larry Raines took over second and stayed there until the end to fend off Josh Boller and Kenny Carmichael Sr. Kris Starks placed fifth.

Kyle Krupa had the lead early in the bomber feature as Cam Harris ran second alongside Tyler Neal followed by Ryan Freeland and Jordan Almanza.

Krupa stayed out front through lap 10 despite heavy challenges from A.J. Smith, who started 10th and Bumgardner, who began the feature in sixth. Bumgardner finally made his pass for the lead on lap 11 and didn't look back as Smith was able to edge past Krupa for the runner-up position. Harris placed fourth ahead of Neal.

In the final feature of the night, Walden gained victory number one as he held off Dustin Colvin over the last half of the feature. Mark Dickerson recorded a third-place finish ahead of Donald Smiley and Larry Hutto.

Next weekend will feature the 12th running of the Patriot 100 for UMP Modifieds. A 100-lap feature paying $3,000 to the winner. The MMSA Sprints will be on hand along with bombers and super stocks.