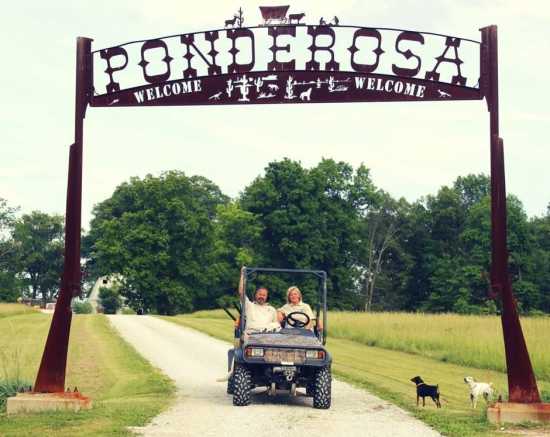 Steve and Missy Carrell, of Spencer, have been discovered new ways to not only grow food organically, but cost-effectively as well.

Ever wonder what exactly goes into your food?

That's the thought on the minds of Steve and Missy Carrell, two pioneers of the aquaponics industry.

If you missed your chance to stop by the Ponderosa Aqua Farm booth at the First Friday Festival, worry not. In an effort to spread the word about healthy-eating, the Carrells encourage those interested to come explore the compound located near Spencer.

With aquaponics, future customers will be able to purchase fruits and vegetables that are 100 percent free of GMOs, or genetically modified organisms. These chemical-ingredients that show up in most government-regulated produce are the driving factor behind the Carrells' decision to create such a farm.

Mr. and Mrs. Carrell took the time to explain to the Banner Graphic just what this system is all about.

"One of the things that really started us going with the whole thing is that my dad has been sick for about the last 15 years," Mr. Carrell said. "A lot of it has to do with the environment -- the chemicals he's been around his whole life. The other thing is that, I see what people eat.

"When you start to question what's in your food; when you start to think about what is in it -- and all it takes is that question -- that's a big deal," Mr. Carrell continued, citing that most ingredients can't even be pronounced by the common consumer. "For me, it was like, 'I don't want to be in that situation.' All these chemicals in my food make me nervous."

Mr. Carrell went on to explain that they initially became interested in organic food, which led them to aquaponics -- a mixture of fish farming (aquaculture) and crop production using a process called hydroponics.

"Aquaculture is a good system, it raises fish," Mr. Carrell said. "But the problem with it is, they use an extreme amount of water. [Industries'] exchange rates on their water, and trying to keep their water clean, are an issue for them. We actually use one-tenth of that water.

"The fish create waste (ammonia), and that has to be cleaned and filtered," Mr. Carrell continued. "Hydroponics, on the other side, has to add chemicals at certain rates -- that allows the plants to take that in and grow. Aquaponics takes the waste and converts it into nutrients."

In short, Mr. Carrell said the fish produce waste (ammonia) which is then dumped into what they refer to as a "media bed." This consists of rocks and worms, so any solid that gets pumped into the bed, the worms eat it and turn it into what's called a "worm-casting."

This casting breaks down into another chemicals that are beneficial for the plants. Furthermore, they produce nitrifying-bacteria which takes the ammonia and converts it into nitrates and nitrites, which are in turn picked up by the plants, leaving the water fresh and clean for the fish.

This full-circle effect is what produces vegetables that are completely free of any genetically-modified organism. The Carrells said that, since they've eaten mostly GMO-free food in the previous months, they can feel the difference.

"We'll go out to eat sometimes, and we feel miserable for the rest of the night," Mrs. Carrell said. "When we eat clean, we go back out and work after dinner. We're not weighed down with our food afterwards, so we can get more stuff done. We have our salads and food, and we go back out and work without feeling too full. Every time I eat at a restaurant, I just have to go home after."

How you can help

The result of the aquaponic process is healthy, chemical-free food. However, it's not without its issues, as mass-produced crops are still higher in availability while being low in price. Spreading the word about aquaponics, Mr. Carrell said, will be the deciding factor of cost-effective organic produce.

"We're probably at least another 10 years away from becoming really mainstream," Mr. Carrell said, adding that the lack of aqua farms directly affects its pricing. "But if we could get a farm located every 20 miles, that will change; you'll start to see healthier food at our stores."

Residents are encouraged to come visit the farm, located at 2632 Ponderosa Rd. in Spencer, Ind., to find out more and sample the healthy produce they create at the Ponderosa.

Part of the problem, the Carrells say, is that most people aren't aware of the dangers lurking within their foods. Pesticides, livestock vaccinations and the active ingredient in "Roundup" are the key factors driving the organic food revolution.

Thanks to aquaponics, the Carrells are able to produce 10 acres-worth of crop using only a 3,770 square feet of greenhouse space. Future plans include to move portions of their services outdoors, in an effort to produce even more strictly organic crops.

To learn more about the Ponderosa Aqua Farm and its aquaponics, visit myponics.com or on social media at bit.ly/ponderosaaquafarm.