The streets Department of Public Works Superintendent Brad Phillips has marked for resurfacing this year are: 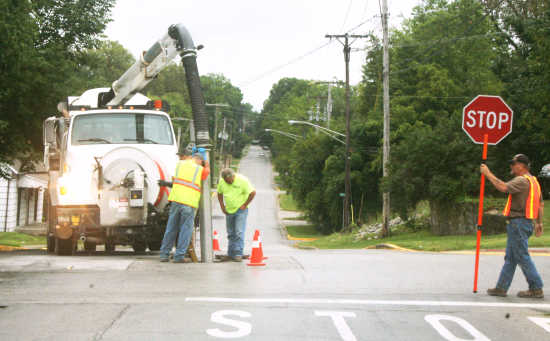 Street and sewer work was done earlier this summer at the intersection of College Avenue and Franklin Street.

-- Center Street, from Fairview to West Street in Foxridge.

The project also include resurfacing on Manhattan Road in the railroad crossing area in front of Phoenix Closures.

However, that work won't be even be started until a project to shore up Manhattan Road and address drainage and erosion issues is bid out and completed.

The schedule for resurfacing is as follows:

Monday, Aug. 31 -- Milling work in preparation of paving is scheduled on Liberty Street (it will be necessary to close it from Jackson to Gillespie), Wood Street, Redbud Lane and Dogwood Lane.

Wednesday, Sept. 2 -- Milling only for remainder of Washington Street and Warren Drive. Repaving work for Main, Center and Wood streets, Redbud and Dogwood lanes and possibly the start of repaving on Washington Street.

Thursday, Sept. 3 -- Milling work to finish any of the above streets not done, Madison and the intersection of Franklin and Arlington.

"We usually are pretty good at working together," Mayor Sue Murray said in announcing the schedule, "and aside from a bit of delay we can get most traffic back on the roads after milling and within three hours of the start of paving."

The one exception is likely Liberty Street.

"Because of the extremely poor subgrade on that street, once it is milled next Monday it will be closed to all traffic until the final asphalt coating is put down, which could indeed be Thursday (Sept. 3)," the mayor added.