Teen turns self in to police for criminal mischief, child pornography 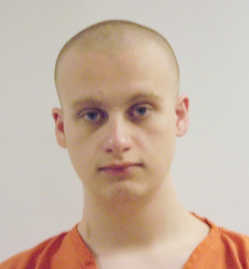 The 18-year-old Greencastle man wanted on criminal mischief and possession of child pornography charges turned himself in to police on Wednesday.

The Greencastle Police Department informed the Banner Graphic that Shea Tahtinen, wanted since last Friday for two felonies and three misdemeanors, turned himself in shortly before 7 p.m. Thursday at the GPD station.

Tahtinen, his father Gary Tahtinen and Pastor Bryan Langdoc of Gobin Memorial United Methodist Church met with officers, and Tahtinen was taken to the Putnam County Jail for book-in.

He was officially booked into the jail at 7:25 p.m.

The teen was originally questioned for the Aug. 13 vandalism of three south side churches. Anti-Christian graffiti was painted on Gobin as well as First Southern Baptist Church and St. Andrew's Episcopal Church.

After identifying Tahtinen as a person of interest, police questioned him and obtained a warrant to search his electronic devices.

The search of his phone revealed a child pornography video. GPD Det. Sgt. Michael Collins reported that the forensic search of the phone also revealed a video of Tahtinen burning a Bible in a Greencastle church parking lot, as well as videos of animal cruelty, Islamic torture and school shootings saved from online sources.

In the criminal mischief case, GPD Officer Darrel Bunten first made contact with Tahtinen based on his connection to a July 27 open line 911 call in which people were speaking about destroying crosses.

A subsequent search of the Tahtinen property revealed a number of examples of satanic paraphernalia consistent with the church graffiti, cans of black spray paint and a CD of Norwegian black metal artist Burzum, whose name was painted on the side of the Baptist church.

Bunten also discovered that Tahtinen bragged about committing the crimes on the Kik messaging app.

Based on these findings, Tahtinen was charged with two Level 6 felony counts of possession of child pornography and three Class A misdemeanor criminal mischief charges.