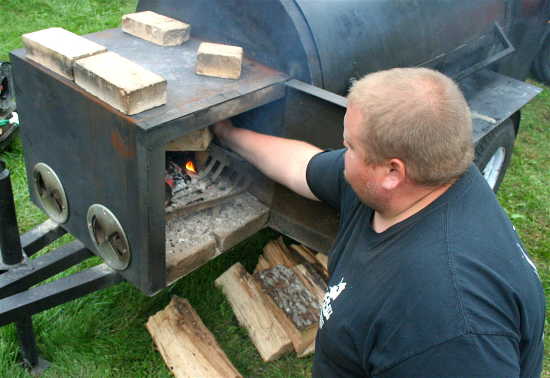 As part of the Roachdale Revitalization Cooperative Alliance's (RRCA) efforts to attract visitors from around the region, this newly annual festival saw hundreds of attendants throughout the rainy day.

Joe Buser, director of the Putnam County Film Commission, led preparations for Saturday's event by employing the services of three vendors (Smokehouse Barbecue, Norvells Barbecue and Hog-In-It-All Barbecue -- supplied by Myer's Market in Greencastle) and several local competitors, including Ron and Mari Raupp, the Spear family (Brian, Taylor and Dalton) and Brian Rhoden with his team from Harrison Street Tavern.

Buser said Saturday that, despite the large turnout, many more attendants may have come if it hadn't been for the day's gloomy weather.

"We're hanging in there," Buser said. "We're going to do it again next year -- we're not going to let (the weather) stop us.

"The vendors came in last night and got all set up," Buser continued. "We have our local guys and a separate rib competition for them. Our judges will come in and taste ribs from each one of these guys and then we'll give out the awards."

Co-winners of this year's coveted 1st Place Spatula were Troy Elless and Eric Shaw, who will continue to pass down the torch handed to them by last year's winner Tony Riggen. Second place was awarded to Jeff Mitchell and third place was given to Brian Spear. 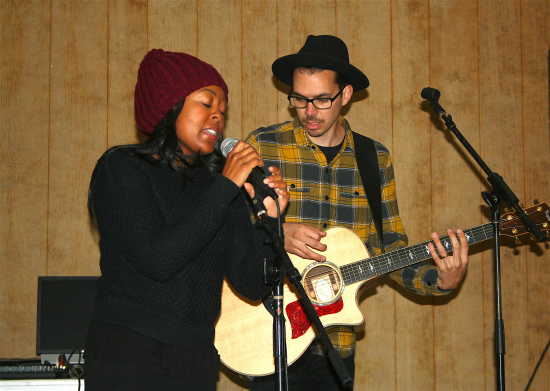 Joel and LaToshia Everson, a.k.a. "Him & Her," kicked off the music Saturday inside the Northside Meeting House during Roachdale's annual Ribs and Blues Festival. (Banner Graphic/NICK WILSON)

Ribs, pulled pork and brisket were the choice cuts of the day, but other dishes both traditional and unique graced attendants' pallets as they mingled through the grounds and the town's Northside Meeting House. Dishes such as ribeye sandwiches, souther bourbon corn and "cowboy soup" could be found throughout the day.

Nancy Buser, Barbara Phelps, Chris Miller and Holly Cook of the philanthropic Delta Theta Tau sorority set up shop in the building's kitchen, serving rack after rack of ribs. Cook said that the North Putnam Jazz Band, consisting of 16 students, kicked off the day's festivities with a mini-parade in front of the meeting house. 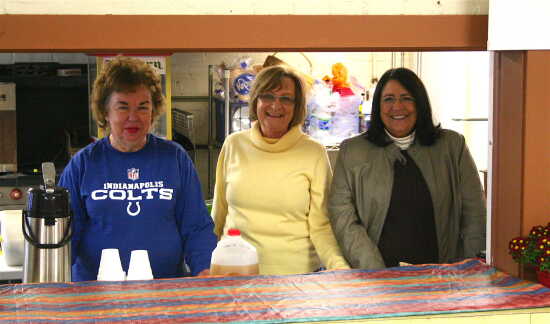 The ladies from the Delta Theta Tau philanthropic sorority set up shop in the Northside Meeting House where attendants were able to take brief refuge from the on-again-off-again rain. (From left) Nancy Buser, Barbara Phelps and Chris Miller manned their posts, serving dozens of hungry visitors. (Banner Graphic/NICK WILSON)

Although this year's rib-roast has now past, Buser would like to invite everyone out for a good time at the 2016 Ribs and Blues Festival, now set to take place on the first Saturday of October in Roachdale.

"This funds what we (the RRCA) do for the rest of the year," Buser said. "When the weather is like this, it hurts our chances for doing other things. But people have made donations today, some significant donations, that are really helping us make up the difference.

"We will perservere," added Buser.

For more information on upcoming RRCA events, visit roachdalerca.org or check out the RRCA on Facebook.