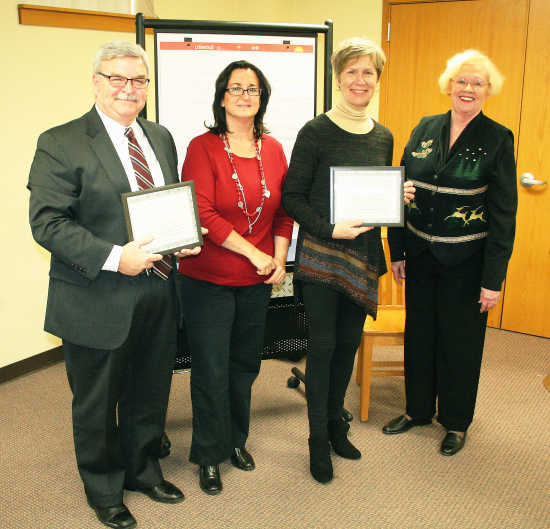 A local project not without its challenges over the past five years has been honored as much for its persistence and perseverance as its historic preservation.

The collaborative effort between the City of Greencastle and DePauw University on the once-in-a-lifetime Stellar Community project has been honored with the 2015 Historic Preservation Award from the Washburn Chapter, Daughters of the American Revolution (DAR), Putnam County.

Mayor Sue Murray and City Attorney Laurie Hardwick represented the City of Greencastle, while Bruce Clute, new community liaison for DePauw, represented the college in receiving the historic preservation honor from Jinsie Bingham of the DAR.

"I can assure you," offered Bingham, who is in her last month of representing the Third Ward on the City Council, "that Mayor Sue and City Attorney Laurie will be having nightmares the rest of their days about this project."

Yet they were able to overcome "miles of red tape, different managers for different project, reluctant participation and disbelief," she added.

The $19 million Stellar project that feature downtown facade facelifts and streetscape improvements to Anderson, Washington, Indiana and Vine streets, "came with 19 million strings attached," Bingham added, "and an astronomical amount of paperwork for which a few trees must have died."

Seriously, however, the city officials and DePauw -- "a very dynamic duo," Bingham said -- were honored for the work their organizations have done in "preparing and implementing and just about to finish the Stellar Community grant," she added.

Clute, whose DPU title is director of collaborative community initiatives, is new to the game, of course, but was chosen to represent the university at the

ceremony in his new capacity.

"Bruce is a new hire at the university," Bingham said, "and the perfect guy for the job as sort of a community liaison."

In bragging on the accomplishments of the city and university in the Stellar effort that was announced in March 2011 and is winding down to its final days as 2015 ticks away, Bingham suggested, "Look around, folks. How about those two paved parking lots within a block of the courthouse? How about all the spiffed-up

"DePauw buildings are now easily located with the new signage. We have newly designed streets. Yo-Yo Ma was here to cut the ribbon for M Squared which we remember as the old Goodwill building and the A & P before that.

"But hands down, the most popular cooperative project is the Anderson Street corridor. Many of us remember when the Dekes (Delta Kappa Epsilon fraternity members) walked down the middle of the crumbling Anderson Street pavement every day, dodging school buses and elementary school kids from Miller School," Bingham mused.

"Well, the Deke house is now an apartment building," she continued. "Miller School is Miller Asbury Apartments. The street is resurfaced and landscaped, opening up a lovely welcome to the campus and the beloved East College building."

Meanwhile, Bingham noted that each year the Washburn Chapter of DAR honors someone locally who has both made and preserved history.

Previously recognized by the DAR chapter for their historic preservation efforts have been:

-- John Baughman, a retired DePauw professor whose many essays about Putnam County history have been published in book form.

-- Jim Cooper, another DPU retiree who is recognized as a premier historic bridge expert for the state of Indiana.

-- Malcolm Romine, a Putnam County native "related to everyone north of McBride's Corner," as Bingham noted, and authored a number of books about early life in the county.

-- Larry Tippin, who has helped restore pioneer cemeteries around the county and whose handiwork can be seen in the old city cemetery next to Blackstock Stadium.

-- And 2014 winners Tim and Kim Shinn, who not only restored their East Washington Street home to brilliance but also redid the old Dr. Zaring house and its carriage house at the corner of Poplar and Vine streets.