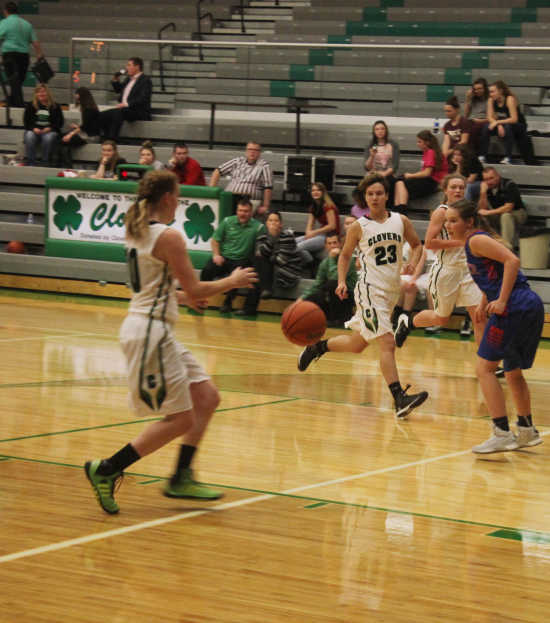 Payton Dorsett makes a pass to Kesey Helterbrand, her Clover teammate, during teh 80-14 win against Eminence Tuesday. (Banner Graphic/JAY LOCKETT)

CLOVERDALE -- The Cloverdale girls' basketball team found little trouble against Eminence Tuesday in an 80-14 victory and coach Matt Langdon was looking to get a lot of different aspects of the game in good shape during the matchup.

"Tonight we had some goals," Langdon said. "It wasn't just on the scoreboard. We've been trying to push the ball up, and in a game like this we try and work on some of those things. Not just the steal and easy layup. We know against North Putnam and Brown County we're probably not going to get that first break. We may have to get that secondary break."

Cloverdale jumped out to a lead in the first quarter and never looked back as seven Clovers got in on the scoring and CHS netted 21 points to just one Eel bucket. 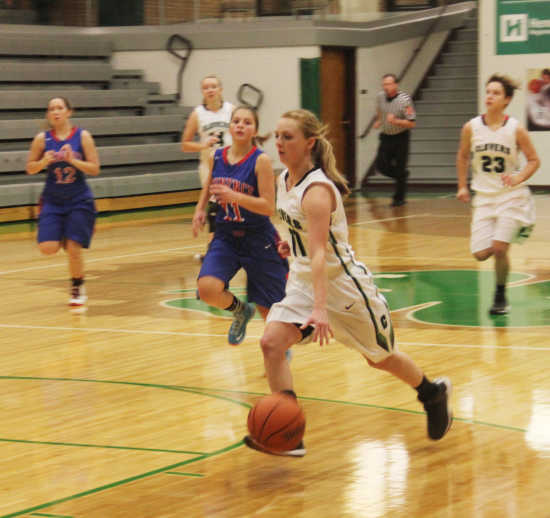 CHS' Lauren Meek takes the ball up the court after a steal against Eminence. (Banner Graphic/JAY LOCKETT)

CHS wants to get into an offensive rhythm and Langdon plans to work on the passing in order to accomplish his goals.

"We've been looking at that," Langdon said. "We try to make that second pass assist or three pass assists to set it up. We are working toward that. We know the game plan each day and we are starting to settle in as a team in our roles."

Payton Dorsett led the Clovers early with six in the first before Abby Walker got hot and hit two of her five three-pointers in the second quarter.

"We are (playing) a lot of half-court defense," Langdon said. "But we're applying some pressure, forcing turnovers and then go-go-go on offense."

The third quarter was the best offensively for Eminence as the Eels scored seven points, however it was also Cloverdale's best quarter with 22 points. Kelsey Helterbrand netted six points into the third and Walker nailed two more threes.

"It didn't just show up tonight," Langdon said. "It's easy to say, 'Wow they scored 80 points. It all came together tonight.' But honestly counting this one, in our last four games we've really seen improvement. We went 2-2 over that stretch. But at Eastern Greene we played well, took them close to the fourth quarter. At Edgewood I was impressed with our efforts, especially in the first half. We've been playing some good basketball."

The Clover effort was not fading Yuesday as the game came to a close. CHS finished with 21 points in the final quarter and held Eminence scoreless for teh period.

Cloverdale will next play North Putnam in a WIC East Division rivalry game Friday. The Clovers met the Cougars in the consolation game of the Putnam County Tournament, winning 44-29.

"I'm hoping with this stretch coming up, we know North Putnam is going to be hungry for a win to get that payback win for the county," Langdon said. "(Cougar Coach Kevin Corsaro) is a good coach and that's a good team up there. They'll get (senior Taylor) Nauert back. But we are confident. The girls are playing with much more confidence. Hopefully we can go up and play a good game."