Local educators urge legislators to do something about state testing issue

At an educational forum fittingly sponsored by Farm Bureau, it was the four Putnam County school superintendents who planted the seeds of change and provided food for thought.

With State Rep. Jim Baird (R-Greencastle) and State Sen. Pete Miller (R-Avon) serving as panelists during a luncheon gathering at Area 30 Career Center, the county superintendents and others expressed frustration at how Indiana's test scores have been miscalculated, misguided and misleading. 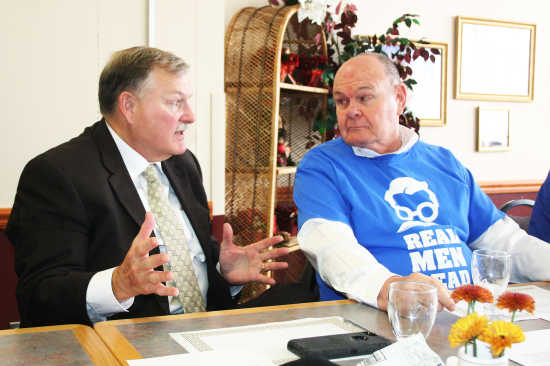 And all that has cultivated a scenario described by Greencastle Superintendent Dawn Puckett as a "spiraling out-of -control situation for education."

The fact that scores produced from statewide tests like the End of Course Assessment (ECA) and ISTEP are factored into annual letter grades each school receives as well as tied to compensation for teachers is just unfair and unnecessary, the school officials stressed.

It's not a situation that has developed overnight, the educators said, explaining a series of actions have undermined staff morale and wreaked havoc on school budgets.

Some of the factors that have spawned the education issue include:

-- New tests with new vendors, resulting in old vendors not cooperating with schools or the state.

-- Changes in the Complexity Index formula -- tied to the local poverty rate -- that have negatively impacted local schools.

The result of the latter, Supt. Puckett told the legislators, is that "the haves have more and the have-nots have less."

The situation has adversely affected the teaching environment as well, she said.

"My teachers are hugely stressed. I've been losing teachers in the middle of the school year the last two or three years.

"All of it combined has become cataclysmic," Puckett added.

"The frustration just flows over the top," he said. "Just give us some time to respond. There hasn't been a break to allow us to catch our breath and catch up."

North Putnam Superintendent Dan Noel added an amen to that.

"We've got a lot of upset parents, a lot of upset teachers," he said. "There's a lot of fingerpointing going on. And I'll be honest, most of it is being directed at the state.

Perhaps worse than that, Noel suggested, is that educators "don't think we're being heard."

That's why they were busy bending the ears of Rep. Baird and Sen. Miller, challenging them to do something about the inequities of the system.

For instance, in one example cited, a school that had an "A" grade after prior testing dropped to an "F" school under the latest testing because the results of 50 tested students were somehow missing and thus evaluated as zeroes by the test results.

"You've heard us say today," Supt. Noel said, "that we don't think the testing is equitable. Do you think January is the time to do something?"

That is when the Indiana General Assembly reconvenes but legislators appear intent on pushing the education issue to the 2017 session.

The educators called for a moratorium on the release of any test scores or school grades until the situation can be straightened out.

The message the county superintendents tried to plow through was that the legislators don't need to wait until 2017 and have the power to make changes during the 2016 legislative session.

"I'm just as concerned as you about these young kids sitting there while we try and hash this out," Rep. Baird said.

Sen. Miller, meanwhile, reminded the group that the state is in "year one of a four- or five-year transition."

Miller, who served on the Education Committee that met five times this summer, said the panel talked generally about the issue and about "eliminating the high-stakes nature we've placed on these tests."

The senator said he wanted to "push back a bit" on the notion the testing issue has cast the state in a bad light.

"The fact the scores are lower was expected," he said due to test changes. "I would rather a student and parent know if a kid's not passing grade level."

He also stressed that the Legislature is charged with implementation, not policy.

"I'm owning up to you today," Miller said, "that I think there's an error in policy."

Assigning A to F grades, retired former North Putnam and Eminence Superintendent Murray Pride said, "has become a status symbol as far as schools go." He said the program was never supposed to be a comparative effort pitting this school vs. that school, but that's the public perception.

"Now we're all looking at the newspapers and seeing we're an A school and you're an F school."

Bernhardt urged a further moratorium on making school letter grades public "until we can get it right."

Also, assigning schools grades can affect enrollment, Pride said, which in turn affects school funding as some students transfer out of lower-grade schools for another A or B school nearby.

And the results can even negatively impact the economy, Cloverdale Supt. Linton said.

"Businesses and companies will look at Indiana, and if they see declining scores, they won't want to bring their companies and their businesses here.

"Schools aren't really failing," he stressed, "education is better than it's ever been."

It just doesn't look that way, Linton suggested, because of the win-or-lose nature of test scores and school grades. 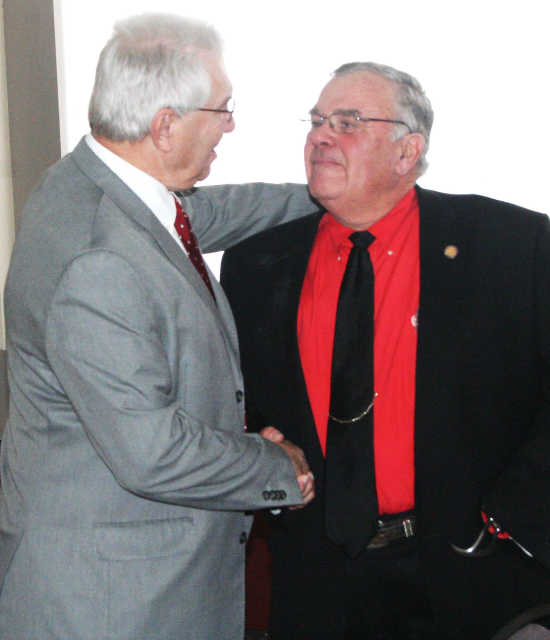 So can anything be done in January?

"January's just going to be a one-year reprieve," Sen. Miller said, alluding to the status of test scores, not school grades.

"I think these discussions need to take place outside the General Assembly," he added. "Our vehicle for discussion there is a bill."

That seemed to frustrate Noel even more.

"If the system is flawed and it's not right, I don't understand how you, as our representatives, can't do something about it," the North Putnam superintendent said.

Rep. Baird seemed to take offense to the notion legislators aren't listening to the educators.

"I have never not listened to you folks," he said, adding that he takes improved graduation rates and better English and algebra scores as positives.

"The bottom line for me," the Greencastle lawmaker said, "is we've got to have young people who are talented."

"This is flawed, stop it. You have the power, you have that authority."

Baird looked to the superintendents for guidance.

The challenge, Miller said, is that the state is not just going to end all testing and with it, educational accountability.

"But what are we going to do?" the state senator asked.

For one thing, Cloverdale's Linton said, "it would be nice to find a way to improve the tone (of the ongoing argument) so it's not so adversarial."

They all agreed on that.

And hear from them, the legislators did.

At the conclusion of the program, Putnam County Farm Bureau President Steve Cash announced the 2016 local Legislative Update sessions are set for the third Saturday of January, February and possibly March.

That means the 8 a.m. sessions at the Farm Bureau Insurance Office on North Jackson Street in Greencastle will be on Jan. 16, Feb. 20 and possibly March 19.