A piece of old Miller School presented to city by developer 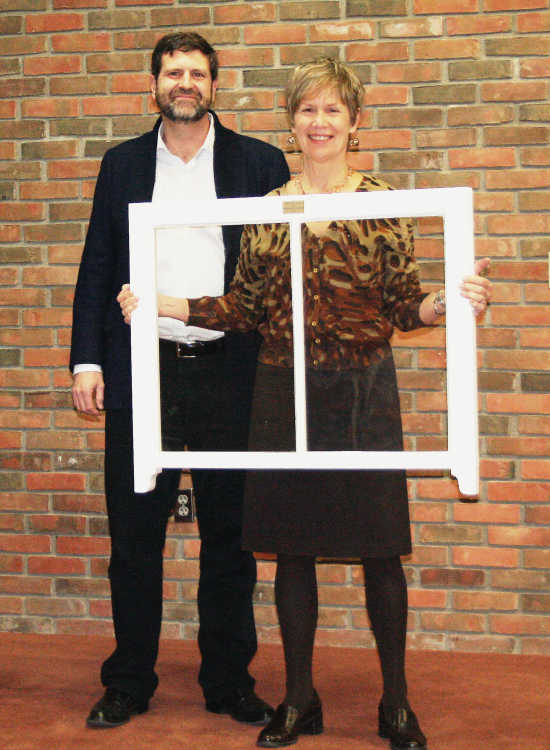 Holding an original window from old Miller School in Greencastle, Mayor Sue Murray displays the token of appreciation the city was presented Tuesday night by Chuck Heintzelman of Milestone Ventures Inc., which has converted the old school into the Miller Asbury Apartments. An open house and ribbon-cutting ceremony is set for 3-6 p.m. Thursday, Dec. 17 at the 522 Anderson St. site. (Banner Graphic/ERIC BERNSEE)

Thanks to the developers of the old Deliiah Miller School property, Greencastle city officials now have their own little window on the world.

Or at least a physical piece of the old school property along Anderson Street.

Call it their window of opportunity.

In appreciation of the city's efforts to help facilitate the project that has seen the old Miller Elementary School converted into 30 Miller Asbury apartments over the past year, developer Chuck Heintzelman of Milestone Ventures Inc. produced an original Miller School building window as an unusual token of his appreciation at Tuesday night's City Council meeting.

Carrying the window -- with what he called its distinctive "lamb's tongue" bottom brackets -- Heintzelman came to the podium at the front of the council room at City Hall to update city officials on the progress of the project.

First off, he invited city officials and the public at large to a 3-6 p.m. Thursday, Dec. 17 open house at Miller Asbury, 522 Anderson St. A formal dedication and ribbon-cutting ceremony is planned for 4 p.m. that day, he said.

The original school window was presented to Mayor Sue Murray in appreciation of the city's part in the project, which enabled Milestone Ventures to purchase the site from the City of Greencastle, which (unbeknownst to city officials until last year) technically owned the old school property when Miller was built.

"As a former student (of Miller School), I can tell you the windows were never that clean," City Council member Jinsie Bingham joked before adding that neither was the window trim ever as bright as the gleaming white of the gift the developer held up.

Meanwhile, Heintzelman noted that 24 of the 30 Miller Asbury units will be occupied before the year's end with moving-in operations under way almost daily.

Six units are left to be rented to seniors who qualify at certain income levels due to the tax credits received by the project.

Interest in the facility, Heintzelman said, has continued to be "very, very strong."

He also was appreciative of the community response to a recent Banner Graphic story that told how the developers sought Miller School-related items that could be donated or loaned for hallway display cases at the apartment complex.

"A number of people brought in memorabilia for us to put in the display cases," he noted.

Overall the project is "nearing completion," Heintzelman said, adding, that there are "still a lot of details to be wrapped up" before the scheduled open house.

He also told the City Council that Miller Asbury residents have expressed interest in the new pickleball courts the Greencastle Parks and Recreation Department is putting in at the tennis courts in adjacent Robe-Ann Park.

In fact, Heintzelman said his company has purchased some pickleball equipment for the residents to use in their leisure pursuits.