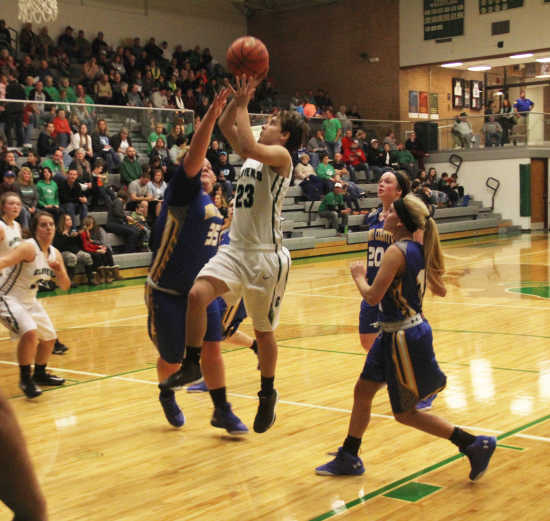 CLOVERDALE_-- A strong second half put the Cloverdale girls' basketball team back in the game but WIC Eastern Division rival Brown County held off the home team Friday night to earn the win, 51-49.

"It was one of those games where through two and a half quarters we didn't play very well," CHS coach Matt Langdon said. "This is a team where we matchup (well). They mirror us. They've got a lot of guards and they have one post player. We have that same thing. They pushed the ball up and we like to push the ball up."

Langdon said he was not happy with the play in the first half as the Clovers were down 24-17 at the break. Seven of the nine second-quarter Cloverdale points were made off foul shots as the game got a little more physical once Mariah Huge stepped in to combat the height of Brown County's Maddy Edds.

Huge fought to get to the foul line against Edds and she ended the game with seven boards and a season-high nine points.

"She played huge minutes for us," Langdon said. "We played her every minute we could. We got her some breaks but Mariah stepped up in a big way defensively. We expected that for her to be able to matchup. But to get a lift on the offensive end, it's exciting. That makes our overall team play better so we can go even deeper into the bench. All the girls were happy for her."

It wasn't only Huge who stepped up in the tough battle. In the third quarter, Abby Walker scored nine of her 13 points and six of those came from the free throw line. Tori Combs pulled down 11 rebounds and Haley Hamm grabbed 10 boards and netted 11 points for a double-double.

"Something clicked for our girls when we found ourselves down 13," Langdon said. "Typically that's a spot where you look up and you are like, 'this is the game.' But our girls fought back I was so proud of that fight in them. They're never going to give up."

CHS did not know how to give up. After being down by 10 for most of the third, Walker nailed a last-second three to make the score 36-30 going into the final quarter.

The Lady Clovers then outscored Brown County 19-15 in the fourth, scoring in a variety of ways. Hamm made two threes. Kelsey Helterbrand, Payton Dorsett and Huge each contributed foul shots and free throws to help CHS win the fourth.

"We had 19 points in the fourth quarter which has been something big for us," Langdon said. "We've gotten beat almost every fourth quarter this year. So for us to score like that in the fourth when the girls have played a lot of minutes was a big step for us. I felt like Brown County played a better complete game but we definitely had moments where we did what we needed to do to win the game. We just didn't do it for the whole time."