by TYLER WADE, For the Banner Graphic 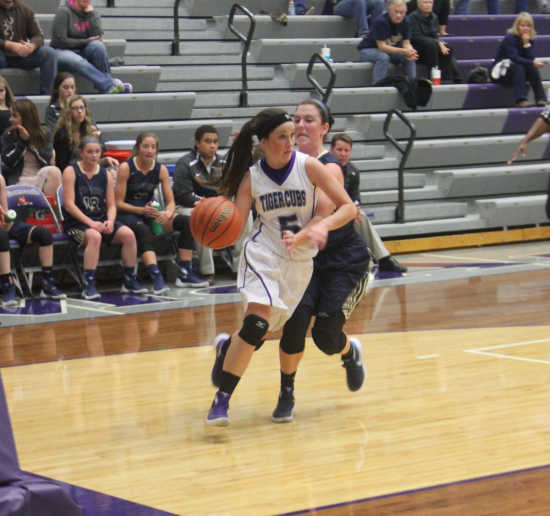 Bethanie Burgeson drives the paint in a game against Edgewood earlier this season. (Banner Graphic/JAY LOCKETT)

SULLIVAN -- After a slow start that only saw them post two points in the first quarter, the Lady Tiger Cubs rallied behind the hot hand of senior point guard Bethanie Burgeson to beat Sullivan, 56-22.

From the start it was clear the host Golden Arrows (2-11, 1-2 WIC) would try to slow the pace of play. xThey succeeded, at least in the first quarter, taking a 9-2 lead.

"This is the first time we've played Sullivan in a while," Key said. "It was a new gym for us and a long trip down here."

The bus lag did not last. Junior Gracie Smith and Burgeson hit four three-pointers in the second quarter and Greencastle (12-2, 3-0 WIC) outscored Sullivan 23-5, including 17 straight points to close out the opening half to take a 25-14 lead into the break.

Key was pleased with the way his team bounced back after the rough start.

"Defensively, we just had to mix things up a little bit," he said. "They tried to take the air out of the ball and slow the game down a lot. We switched to (playing) man-to-man and then a 1-3-1 that gave them a different look."

The second half showed more of the same, the Cub zone held Sullivan to just eight points in the final 16 minutes of play.

"We pride ourselves on our 2-3 zone," Key said, "our ladies are very active (defensively). Our goal each week is to have a lot of deflections. Tonight, we did a great job of keeping the ball out of the middle and making them make long passes."

Burgeson led the Lady Tiger Cubs in scoring with 19 points, including three 3-point baskets during the game-changing run in the second quarter. Smith chipped in 11 points.

Greencastle has a couple of days off before taking on county foe Cloverdale on Tuesday.

"Cloverdale plays very strong defensively," Key said. "We have to come out strong, move the ball, try and get each other shots.

"It's a county game. The Clovers always give us a tough look."