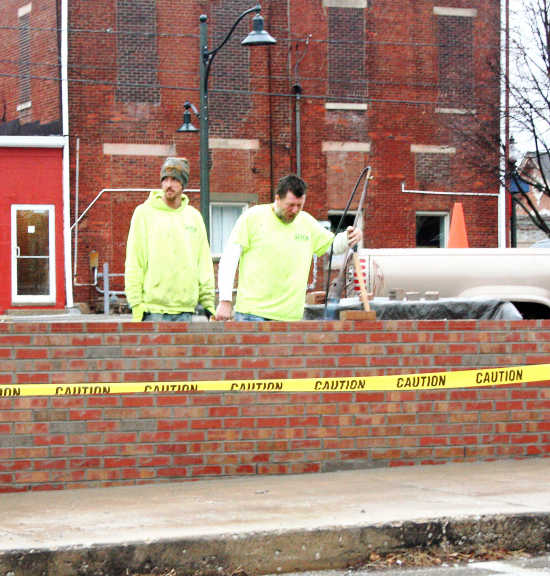 Workmen from Joe Spiker Excavating try to dry out the brick of the new wall along the south side of the Vine Street parking lot in order to continue progress on the project Wednesday before the rains hit. (Banner Graphic/Eric Bernsee)

During outgoing Greencastle Mayor Sue Murray's recent reception sendoff, a lengthy list of the accomplishments and achievements of her eight-year mayoral tenure was read aloud by City Attorney Laurie Hardwick.

And when it was the mayor's turn to respond, she graciously thanked everyone involved in making all those things happen -- but quickly added a caveat.

"Just one more thing," she smiled in a parting shot, "and then I promise, I'm done."

That one more thing is redoing the Vine Street parking lot to match the appearance of the two new city parking lots created in the downtown -- along Market Street (the old Moose lot) and Walnut, Indiana and Jackson (the old First Christian lot). Aesthetically, for Vine Street that means erecting a brick wall defining the south-side boundary of the parking area.

And despite it being late December and officially winter, the brick wall is well under construction. It was nearing completion Wednesday morning as workmen from Joe Spiker Excavating attempted to dry the brick to continue progress that will include a limestone cap.

The new brick wall includes cutout access sections to allow passage between the lot and the post office.

At Tuesday's Redevelopment Commission meeting, Mayor Murray explained that because the Vine Street streetscape project came in under budget, the city will be able to put up two matching decorative lights along the Walnut Street side of the lot to match lighting already in place along Vine Street and in the rest of the downtown.

After that, the mayor noted, city officials next year can talk about resurfacing the Vine Street parking area, redoing the plantings there and removing the concrete bumper stops.

"That should clean it up nicely," she said.

"It's exciting to see it still going on," she said. "Who knew it would be 50 degrees on the 22nd day of December?"

Looking back on the Stellar effort that began with the March 2011 announcement of the city receiving more than $19 million in funding, Mayor Murray said, "it really has gone amazingly well."

Lately, of course, things have gone more smoothly, they conceded.

So is there a completion date at hand?

"The masonry work is mostly done," the mayor said, adding that if it weren't for necessary exterior painting, the facade project would be "very close to being done on deadline."

But painting of the cornices on several downtown structures will probably have to wait until next spring, Hardwick said.

And when it is all done?

"I think you're going to be pleased and excited," Mayor Murray told Redevelopment Commission members Erika Gilmore, Drew Brattain and Tanis Monday, "about some of the things being talked about being developed once the facades are all done."

The next meeting of the Greencastle Redevelopment Commission is set for 5:30 p.m. Wednesday, Jan. 27 at City Hall.