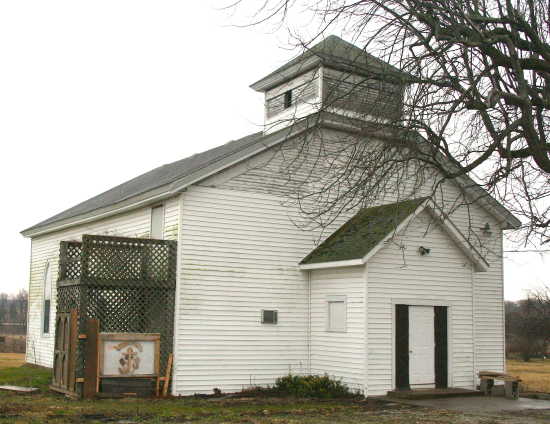 New Maysville Church, located at 8939 County Road 675 East, is welcoming persona of all ages to its Sunday service while undergoing repairs and improvements.

NEW MAYSVILLE -- Establishments come and go, but there is one church in Putnam County that has a resident very determined to keep it alive.

Mike Foster, current owner and pastor of New Maysville Church since March of 2014, purchased the nearly 200-year-old structure with the idea of turning it into a "youth-oriented" facility, focusing on preparing students for the world ahead.

However, due to some untimely frostbite and a lack of funds, Foster says it has taken longer than expected to get the church into shape.

"I'm all alone here financially and (with) the repairs," Foster said during a brief interview with the Banner Graphic. "My plans were to have the church divided -- with the Outreach Ministries over there."

Foster referred to the adjacent parsonage, saying the additional structure has added to the overall process.

"I was going to have everything from a food pantry to ball diamonds over there -- anything and everything that has to do with the public," Foster said. "(The church) was going to be used primarily for the Bible -- teaching, training, everything. That way I could concentrate on preparing (attendents) for heaven and (for them) to also be able to go out and be witnesses in the world. Right now we really need that."

The ball diamonds Foster referred to stem from an dream he had to utilize the church property for the installation of two youth-sized baseball fields that would include lights and fences. Foster has consulted multiple individuals on the matter, stating that further acreage may be needed to build such a park.

"There's enough room, possibly, for two diamonds if I do it right," Foster said. "It depends on several things, but it would be for boys up to seventh grade and girls all the way up to 12th grade."

Stan Lovins, owner of Sandlot Ministries in Danville, spoke with Foster about the idea.

"He used to be a professional baseball player," Foster said. "He blew out his shoulder and started Sandlot Ministries. He combines sports with leadership for the parents while teaching the kids about baseball.

"I want to try to get him over here to help set it up, or at least look at it and give me the dimensions," Foster continued. "I also know a guy, Bob Smith of Canaan Church -- I've talked to him and he said I would have to ask for about another 20 feet of the farmer's field."

Acquiring the property required to do so, Foster said, has been added to a laundry list of sorely needed repairs to make the church fully functional.

However, despite a lack of bathrooms in the building itself, Foster has been conducting church services for quite some time with a functional sound system and homemade pulpit.

"I welcome anyone who wants to come to the church. I start services at 10:30 a.m. every Sunday," Foster said, citing that a portable outhouse has been placed on the property. "I don't have Sunday School set up quite yet, but that will come."

Foster said he is currently writing the bylaws of the church in the wake of the LGBT movements and in light of recent decisions made by the State of Indiana.

He is also currently looking for a music minister.

The town itself, named after Maysville, Ky., was first platted in 1832 by Kentuckian Richard Biddle on land owned by John Johnson, William Welch and Aquila Talbott.

The building in discussion was erected eight years later by The Regular Baptists denomination in 1840 as New Maysville Baptist Church until its relocation around the corner as New Maysville Christian Church in 1856.

Anyone interested in attending or responding to the call for a music minister may contact Foster at 317-410-2115 for more information.