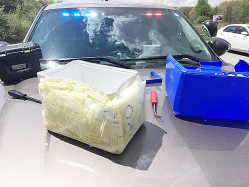 Its outer container peeled away, this cooler is revealed to have four kilograms of illegal drugs hidden inside. Putnam County Sheriff's Department Maj. Dwight Simmons and K-9 partner Bo initiated the traffic stop and were later assisted by Indiana State Police and the federal Drug Enforcement Agency. (Courtesy of Putnam County Sheriff)

A Thursday, April 28 traffic stop by a Putnam County sheriff's deputy resulted in the seizure of nearly nine pounds of methamphetamine and heroin.

On Saturday, Sheriff Scott Stockton reported that Maj. Dwight Simmons made a traffic stop of an eastbound 2010 Nissan pickup truck on Interstate 70 for a traffic violation and found it occupied by several people, including children.

When Simmons began asking where they were headed, the occupants had different locations and itineraries. The deputy said the passengers were acting nervous and their statements were not making sense.

Simmons then requested the driver's consent to search the vehicle. When asked if there were any illegal drugs in the vehicle, the driver responded "I hope not."

Simmons utilized his K-9 partner Bo, who then alerted to a cooler in the back seat. The cooler was found to contain three kilograms of methamphetamine and one kilogram of heroin.

Simmons was then assisted by ISP Troopers James Wells and Yan Dravigne, and later by members of the federal Drug Enforcement Agency.

Sheriff Stockton said the delay in reporting was necessary so officers and agents could continue the investigation and take it to the next level, which they did. "The results (though classified) led to even more successes on the war on drugs," Stockton said. "There are times in ongoing investigations such as this that it is imperative in the efforts to get to the supplier of the illegal drugs which are plaguing our nation.

"By having the already well-established relationships with members of the Indiana State Police, as well as the DEA and all of our law enforcement partners, we can, and will continue to make a difference."