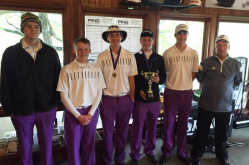 Rain shortened the Greencastle Invitational boys' golf tournament on Saturday, but the host Tiger Cubs played well despite the poor weather conditions and finished first in the four-team event.

Jake Buis was the medalist for the meet with a 37, followed by Jake Bennett in third with a 41.

Jonah Stevens added a 43 for the Tiger Cubs, while Blaise Hasty had a 45 and Jaxon Parmley had a 46.

"This was a very good team win," Greencastle coach Steve Paquin said. "We had very difficult playing conditions because of wet greens and fairways."

Paquin was very pleased with the 37 shot by Buis, and noted that Bennett had an eagle 2 on the par 4 third hole, holing his second shot from about 120 yards.

"Everyone else played consistently scoring near their average," Paquin added. "This year in tournaments we have been first, second, third and fifth. These places are very good considering the inexperience of this team."