Today marks the debut of the College Report column in the Greencastle Banner Graphic.

This column ran for the past 11 years in the Terre Haute Tribune-Star as I worked as a columnist and correspondent there, and has been a popular item among those readers over the years.

All Putnam County high school graduates known to be competing or coaching at the collegiate level will be written in a sport-by-sport listing, as the athletes from baseball, golf, tennis, softball and track and field are presented today.

The current plan is to have the column to run on Mondays.

Many people wonder how the compilation of this information takes place, and the technology of today makes this task much easier than it would have been 30 years ago.

I follow on Twitter and/or Facebook many of the college teams which have multiple athletes under my watch, and I can locate their achievements in that way.

I also have "Google alerts" set up for many of the most prominent athletes.

These alerts automatically send me an email every morning with all Internet mentions of those athletes for the previous day.

Besides the accomplishments of current college athletes, the column will also focus on signings of current high school athletes and will try to include quotes from the athlete, his/her high school coach and also future college coach.

I have noticed that in the past that only a photo was run in the Banner Graphic of the local athlete's signing ceremony, but this column will greatly expand upon that coverage.

I have joined the Banner Graphic late in the school year, so I am still in the process of compiling a list of those current local athletes who have signed to play collegiately.

Once the list is compiled, I will send it to each local athletic director to be checked for any omissions. Each of the athletes on the list, and their coaches, will then be contacted for quotes and information.

The hectic nature of the post-season tourneys over the rest of May will make this task a little tougher, so the ADs will be called upon to help in this process.

The end result is worthwhile. When I started my sports journalism career at the Tribune-Star as a high school senior in the fall of 1979, high school athletes transitioning to college somehow became a great interest to me and that has continued ever since.

Anyone with additions or corrections to today's lists is encouraged to send them to me at sports@bannergraphic.com. 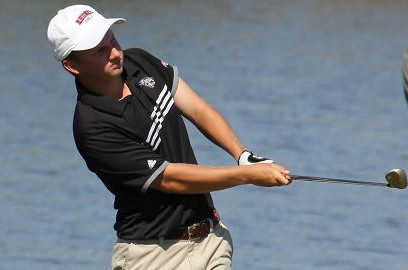 Alec Davis of Greencastle was named the Southern Athletic Association co-Golfer of the Week this spring, and also earned second-team all-SAA honors for his play in the conference tourney.

Katie Hedge, Sr., Franklin -- Tied for 8th in the Heartland Collegiate Athletic Conference Championships with a 188.

Alec Davis, So., Rhodes (Tenn.) -- Was named Southern Athletic Association men's co-Golfer of the Week for the period of April 6-12. Shot rounds of 73-70--143 to tie for fifth in the Emory Spring Invitational and helping the Lynx squad secure a third place finish. Earned second-team all-SAA honors for his play in the conference tourney in April. Davis played third on team and shot rounds of 73-72-74 for a score of 219.

Laura Worthington, Fr., Franklin -- Placed 13th in the hammer throw at 36.85 meters and 17th in the javelin (26.80 meters) and the discus (31.56 meters) in the Heartland Collegiate Athletic Conference championships.

Colleen Weatherford, Jr., Butler -- Won the 1,500 meters with a time of 4:29.78 last month in the Illinois Twilight meet, edging Hanna Winter of Illinois at the line.

Brittany Love, Fr., Franklin -- During the indoor season, placed 17th in 6:06.91 in the mile run in the DePauw Invitational.

Ryan Chestnut, So., Indiana State -- Finished in sixth place in the shot put in three different meets, with a long throw of 15.69 meters. Had top finish of fourth in the hammer at 53.05 meters in the Pacesetter Invitational and a best finish of fifth in the discus in the Gibson Invitational at 45.95 meters.

Klayton Vittetow, So., Vincennes -- Placed fifth in the 110 high hurdles in 17.98 in the Bill Smith Challenge and placed second in the 400 low hurdles in 57.15 at the Bellarmine Classic.

Ariel Higgins, Fr., Butler -- Placed 10th in the 100-meter hurdles in 15.98 in the Oliver Nikoloff Invitational at Cincinnati last month.

Ryan Battin, Jr., Indianapolis -- Has played in two games and is hitless in three at-bats.