She was born in Indianapolis on April 30, 1937 to the late Dale and Sarah (Martin) DeHart. 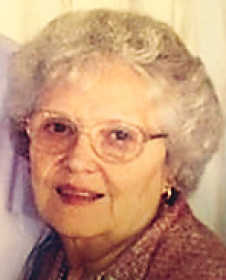 Edna graduated from Ben Davis High School, and she then attended college. She worked as a supervisor at Pleasant Heights Baptist Church in their daycare for many years.

Edna enjoyed knitting, crocheting, Bible study, her Sunday school class and spending time with her family, especially her grandchildren and great grandchildren. She will be greatly missed.

She was preceded in death by her parents, her husband, sisters Betty Lou Eldridge, Gwendolyn Warfield and Adeline Lair, and brother Joseph DeHart.

Funeral services will be conducted at noon Monday, May 16 at Life Spring Church, 1700 W. U.S. 36, Bainbridge, with Pastors Richard A. Warren and Gerron Ayento officiating.

Friends may visit with the family prior to the funeral from 10 a.m. until noon Monday at the church.

Memorial contributions in Edna's memory may be made to Lifespring Untied Youth.

Machledt and Servies Funeral Home has been entrusted with the funeral arrangements.