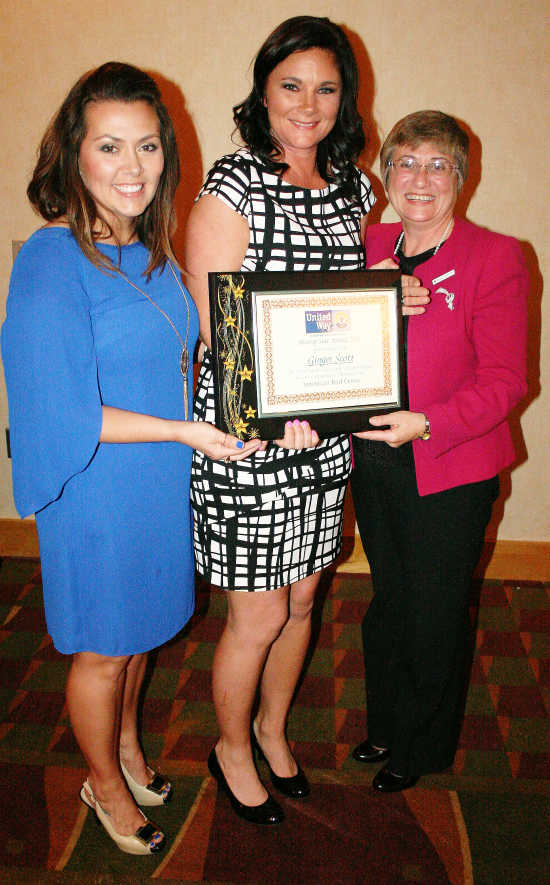 Speakers spent the evening Tuesday cheering the accomplishments and predicting a rah-rah future for member agencies of the United Way of Putnam County.

But United Way Executive Director Jennifer Edwards literally brought the cheering to the forefront of the annual dinner meeting at the Inn at DePauw when she called upon board members to join her at the front of the room and turned them into a cheer squad to celebrate the organization's latest efforts at the conclusion of the evening.

They cheered that the current campaign, as reported by campaign chairman Nancy Michael, has topped the six-figure mark toward a goal of $150,000. 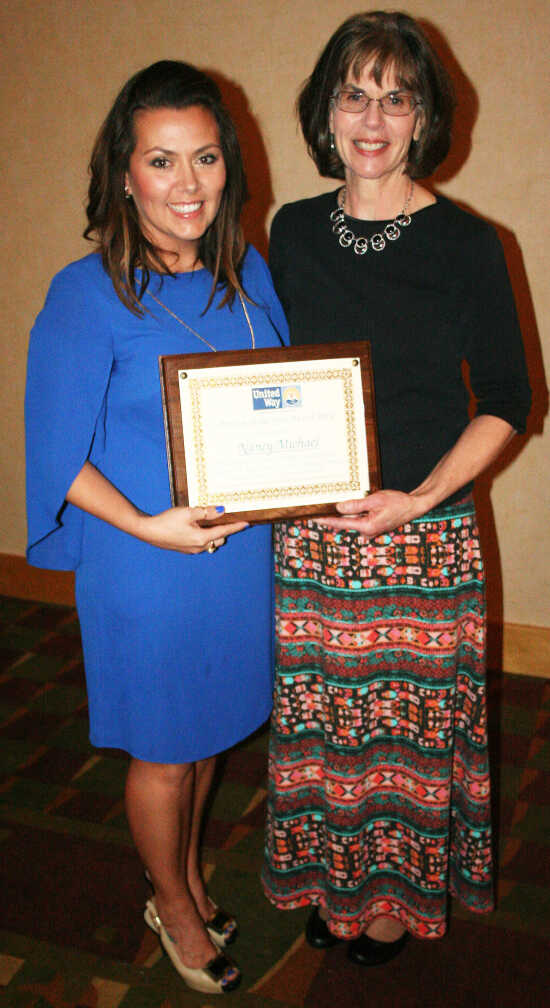 Edwards (at left) presents the 2016 United Way Director of the Year Award to Nancy Michael.

But the United Way is not finished with its work, Michael stressed, noting that "as we move forward we hope to inspire others to be a part of our cause."

She ended her presentation with the suggestion, "Why not give?"

Michael, who will be United Way vice president for the coming year, later received the 2016 United Way of Putnam County Director of the Year Award presented by Edwards

"I really don't deserve this," Michael, the three-term former Greencastle mayor, said in receiving the honor. "It's awesome serving this community. If you really want to do something for me, give."

Presenter Brooke Trissel noted that Scott's "commitment to the community goes far beyond the Red Cross."

"I could keep you here all night listing all she has done," Trissel added, providing a few highlights that included Scott's involvement with the Greencastle Rotary Club, the Mary Allison Children's Trust, the Putnam County Community Foundation and more.

"She is a true example of what it is to volunteer your own time, energy and spirit," Trissel praised.

Scott said she was speechless.

"And most people who know me know these days that's something in its own right," offered Scott, who recently stepped down and retired from her work with the Red Cross.

Before leading the group in cheers, Director Edwards commended the 14 United Way partner agencies by saying, "They're the workhorses. We raise the money."

"Lasting change can start with one person," she said. "One person can make a difference, and I beg you to 'be the one.'"

"Live United: Be the One" is the current campaign slogan of the United Way, as President Cathy Tipton pointed out in her remarks kicking off the program.

Officers for next year will be Tipton as president, Michael as vice president, John Kerrigan as treasurer and Shane Johnson as secretary.