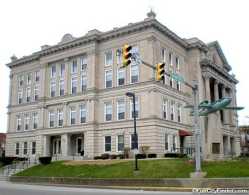 As a group that has to account for every dollar the county spends, the Putnam County Council acted a bit out of character at its most recent meeting.

The council approved eight new security positions without certainty of where the money will come from.

At the urging of Circuit Court Judge Matt Headley and Sheriff Scott Stockton, the council approved a pair of full-time bailiffs for the county's two courtrooms and five new jail officers for the Putnam County Jail.

The money is tentatively to be drawn from the county's new Public Safety Local Option Income Tax (LOIT).

However, with the county not through a full year of the new tax and with much of that money earmarked for new 911 software -- software that was the main reason for the new tax -- it's unclear how much of the Public Safety LOIT money is available.

Those concerns aside, the council chose to move ahead with projects that have been discussed for several months, if not years.

Although Sheriff's Department administrators have known for some time the jail is understaffed, a recent visit from a state jail inspector brought it more sharply into focus.

Chief Deputy Phil Parker explained that the inspector "told us that we were at about half staff in terms of full-time."

This would mean the addition of 12 or 13 jailers. For now, PCSD requested five.

"We understand the baby steps we need to take," Parker said. "We feel these five positions take a tremendous step toward filling the void that we need."

Having listened to Parker's and Stockton's explanations, Councilman Dave Fuhrman put the problem in some perspective for his colleagues.

"The issue's been brought up," Fuhrman said, acknowledging the county's liability. "We have to do something about it."

"When you are short-staffed like that and a fight breaks out, the good guys get hurt," Brown said.

After extensive discussion, including a proposal to hire three jailers, Furhman made the motion to hire five jailers, which was seconded by Councilman Phil Gick.

The initial vote was 3-1-1, with Jill Bridgewater dissenting and Larry Parker abstaining, both citing concerns about the source of the money.

This left the motion one vote short with Vice President Keith Berry absent and President Darrel Thomas sticking to his normal practice of voting only if a deciding vote is needed.

After brief deliberation, Thomas also voted in the affirmative, approving the new positions by a 4-1-1 margin.

The bailiff issue, also the subject of extensive scrutiny, was before the council after the Putnam County Commissioners had recommended a pair of part-time bailiffs earlier in the month.

Judge Headley kicked off the discussion with an impassioned description of his feelings after nearly being attacked in his courtroom in March.

"I love my job but a couple of times recently have made me pause," Headley said. "I don't want my widow to come here and say, 'He was here asking you about this.'"

On that occasion, the courtroom was spared further violence because of the presence of Cloverdale Police Sgt. Charlie Hallam, in court to testify in another case.

Headley cited the grip that drug addiction has on some people in his courtroom as one reason for the need.

"People are different than they used to be," Headley said. "I did 20 criminal cases this morning and 15 were methamphetamine. People don't think right."

Despite the commissioners' suggestion of part-time positions, the judges and the Sheriff Stockton, who shares the load for courthouse security, urged the council to hire full-time bailiffs. Headley said he believes part-time staff could leave the courts and court staff vulnerable at unexpected times.

"It's kind of like an emergency room," Headley said. "You can't just turn on the lights when someone comes in there."

Swayed by the words of Headley, Stockton and other courthouse employees in attendance, the council approved the two new positions in a 5-0 vote.

* Sheriff Stockton requested a blanket approval of his next 20 part-time and 20 full-time jail hires. He cited the ongoing need for approval following the 2009 "hiring freeze" instituted by both the council and commissioners.

"I can't get here fast enough to replace the people I need to replace," Stockton said. "I can't get them trained in time before they quit and I need more people."

The council was reluctant to grant blanket approval, but instead went a step further, questioning the ongoing practice of pre-approval. Generally, department heads request approval and are asked if the money's budgeted. When they say it is, approval is almost always forthcoming.

"If they are not making a new positions, just filling a hole, they don't need to come to us," Gick said.

The motion was made to return hiring autonomy to the department heads, replacing it with a request that they report to the boards following their new hire.

The motion passed 4-1, with Fuhrman dissenting.

* The council made a pair of appointments to the Putnam County Public Library Board. Lisa McCoy was approved for a second term, while Kayla Birt Flegal was approved to replace Nancy Zennie, who does not wish to continue.

* The council approved the allocation of $700,000 for five bridge replacement projects this summer. The money was already in the budget, but needed to be allocated. All five projects have been approved by the Putnam County Commissioners.