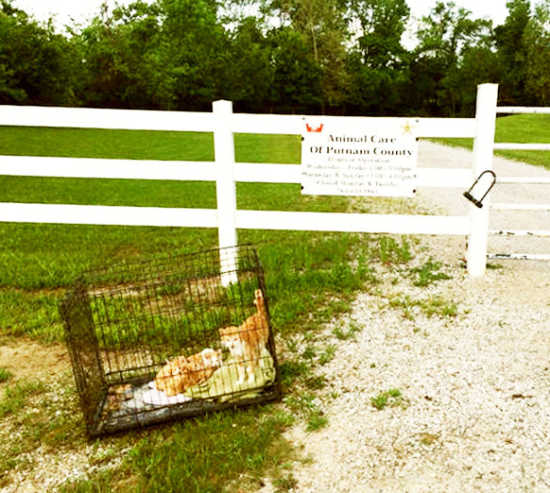 Courtesy photo A mother cat and litter of kittens were found outside the main gate of the animal shelter along State Road 240. The cat and her kittens were left with no access to food or water and no protection from the elements.

Under a hot sun with temperatures in the mid-80s, a mother cat and a litter of kittens were unceremoniously dropped off in a cage Friday at the Putnam County Animal Shelter without food or water.

A shelter spokesman noted that the condition of cat and kittens seems to be improving, they were in poor condition. In addition, they were forced to cope with "unnecessary trauma."

The Humane Society of Putnam County, which operates the shelter, issued a stern letter of reprimand in response, targeting whoever dropped off the cat and kittens at the front gate of the shelter along State Road 240 without protection from the elements. The pointed reprimand was posted on the HSPC website but by mid-day Tuesday had been removed.

The Humane Society reminds residents that dumping animals is illegal.

"For these cats and those of us who have to clean up this mess, literally and figuratively, it is heart breaking," the Humane Society stated in a post to its Facebook page.

"We get it," the notice continued, "you must not like fuzzy balls of fur who just want to snuggle with you and show you they love you. Cats, dogs and other pets aren't everyone's cup of tea, but that doesn't entitle anyone to behave this way.

"Although we are very grateful these cats are now receiving the care they need, we sincerely hope you change your ways in the future," the message concluded.

Persons may can contact the Putnam County Humane Society at 653-1943 for more information or to learn how to surrender an animal properly.