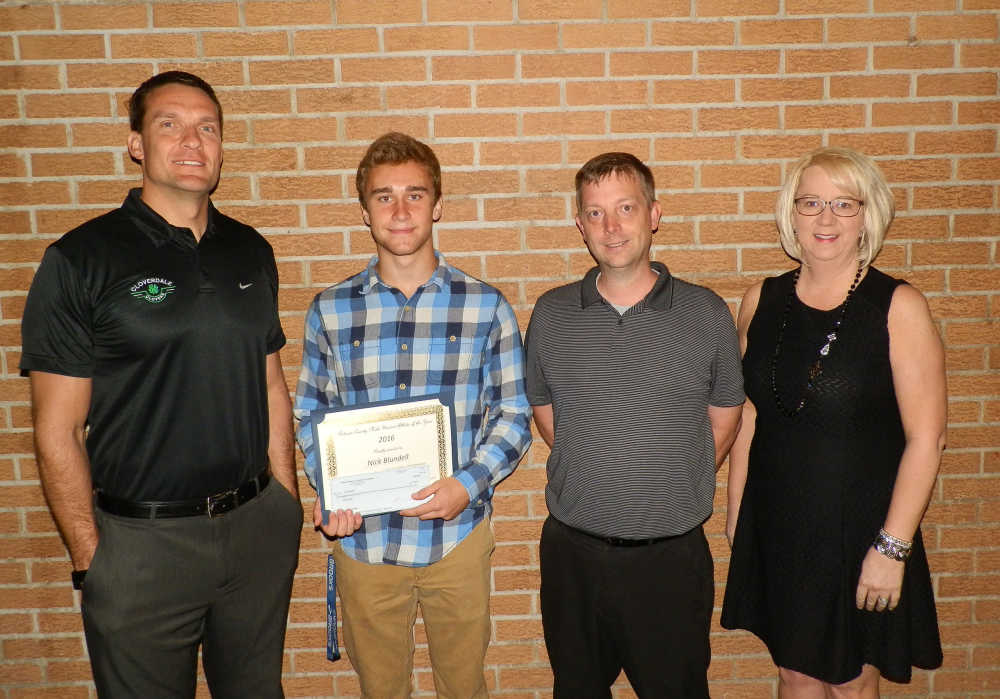 Cloverdale's Nick Blundell (second from left) was presented with the Putnam County Senior Student-Athlete Award last month. Witnessing were (from left) Cloverdale athletic director J.J. Wade and Brian Cox and Beth Flint of the Chamber of Commerce. He received a $250 scholarship from Teachers Credit Union.

Peer pressure is normally a bad thing for adolescents, but Nick Blundell has that concept to thank as he heads to Bloomington on Saturday for the IHSAA state track finals.

"I was in fifth grade, and all my friends were talking about cross country because they were doing it," recalls Blundell, honored last month as the male winner of the Greencastle Chamber of Commerce/Teachers Credit Union "Putnam County Senior Student Athlete Award.

"I had played soccer in Greencastle through elementary school up to that point, but I decided to join up."

His earliest memories of the sport are not fond ones. 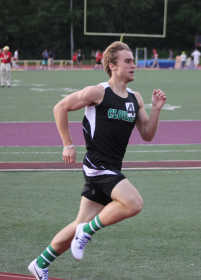 Nick Blundell sprints on his first lap during the Bloomington North boys' track regional, where he placed second in the 800 to qualify for the state finals.

"At first, I hated it," he said. "After every race I would say that I was never doing cross country again, but I kept going back and I liked it more and more."

Blundell was honored to receive the award from the Chamber, in spite of his lofty credentials.

"To be honest I don't know a lot about the award, but from its name it sounds like a big deal," Blundell said. "I'm deeply honored and humbled by the fact that people would think of me to nominate out of all the people in our school. It's a great thing."

Blundell participated in track and cross country for all four years of high school, and wrestled for his first three years before taking his senior year off to focus on track conditioning. Last fall, he served as the kicker for the football team while also running cross country.

"After I was done with cross country practice, I would go kick until football practice was over," he said. "It was fun, and I'd say it was worth it."

Blundell had been seeded fourth in the 800 for last week's Bloomington North regional, but focused his attention on reducing his time on the first of the two laps and was able to cut enough time to finish two spots ahead of his seeded time to qualify for the state finals for the first time.

He agrees with other running enthusiasts who say that while the 800 is not the longest of the running events, that its nature makes it the toughest event.

"I've done the 200, 400, the mile a few times and the two mile a few times, as well as cross country, and the 800 is the toughest," he said. "You can pace yourself better in the longer races. In the 800, it's the equivalent of doing the 400 on your first lap and then you have to go around again. I have a great coach [Andy Tyler] and he gives me great advice on what to do."

"Nick is a one-of-a-kind student and athlete," Wade wrote on Blundell's application. "He works extremely hard with his training and leads others by example. His teammates cannot help but work hard around him because of the effort and the encouragement he puts forth during practice and competition. He is a genuine person who treats all others with respect and dignity.

Blundell plans to attend Indiana University this fall to major in biology on a pre-med program, with an eventual goal of going to medical school.,

He credits his sports with making him a better person.

"Sports have shown me that the closest friendships can come out of sports," he said, "As well as perseverance and not giving up no matter how awful things are." 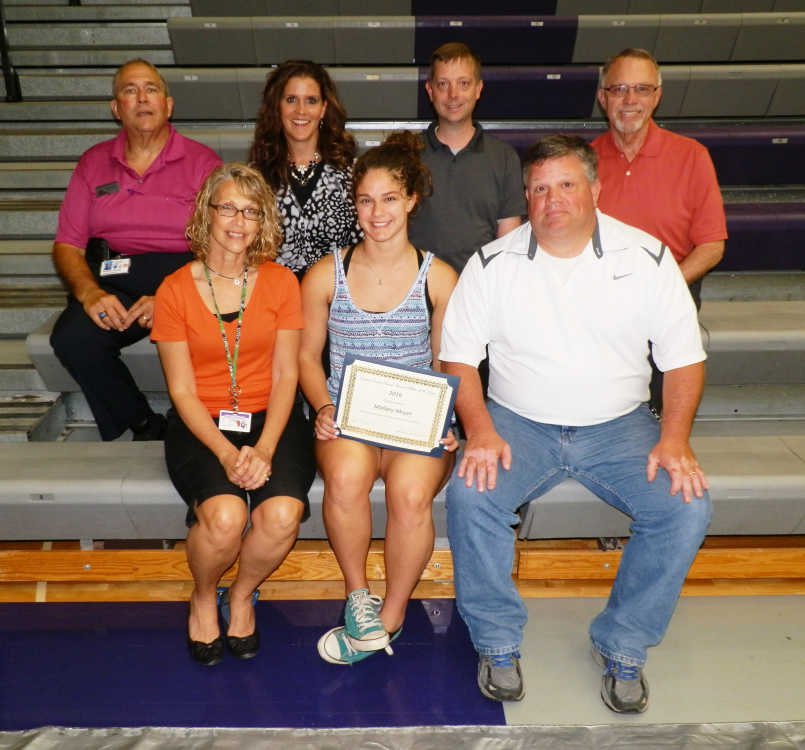 Mallary Meyer (front) of Greencastle was honored with the Putnam County Senior Student-Athlete Award last month.She is pictured with her parents, Brenda and Mike. Witnessing (back, from left) were GHS principal Russ Hesler, Amy Trusty and Brian Cox of the Chamber of Commerce and GHS athletic director Greg Hill. She received a $250 scholarship from Teachers Credit Union.

Greencastle's Meyer was finalist in swimming

To accomplish everything she did in high school, recent Greencastle graduate Mallary Meyer needed a strong work ethic.

Meyer, honored last month as the female winner of the Greencastle Chamber of Commerce/Teachers Credit Union "Putnam County Senior Student Athlete Award," definitely has that desirable trait and knows where she got it.

"Sports have really helped me with work ethic," she said. "Coach [Kent] Menzel always tells us to emphasize academics first, family second and sports third, and that's the way it should be."

Meyer participated for four years in both soccer and swimming, but it was in the pool where she had her greatest success.

Meyer's many hours of practice in the water paid off last winter when she qualified for the IHSAA state finals in the butterfly.

"That was really exciting," she said. "We broke a couple of school relay records in swimming, and just to get out of the sectional is a goal for all of us."

Meyer was thrilled to receive the honor from the Chamber, which was presented during graduation practice to her complete surprise.

"I know it's a tremendous honor to win this award," she said. "It was really exciting."

Meyer will be attending Florida Southern College in Lakeland, where she will major in chemistry.

"I wanted to get away from the Midwest and spread my wings," she said. "My uncle told me about it, and it's a really great school."

Meyer will be swimming her meets in an outdoor pool for the first time, one of the many perks of the warmer climates that FSC has to offer.

Until she departs for college, Meyer will work as a lifeguard at the Greencastle city park pool and will be coaching a team in the Putnam County swimming program.

Athletic director Greg Hill spoke highly of Meyer in nominating her for the award.

"Mallary is a strong leader and leads by setting an example for her teammates," Hill wrote. "She is one of the hardest-working athletes we have in our school, and she's always striving to reach her full potential. We are proud of Mallary and believe she is a strong contender for the honor."