A 32-year-old Putnam County man is facing arson charges for allegedly setting fire to the Bainbridge home of his "soon-to-be ex-wife" while she was inside sleeping last month. 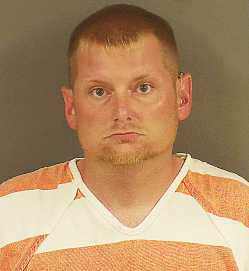 One count of arson is tied to endangering human life, while the other is specific to knowingly damaging property with a value of at least $5,000.

Lawless was arrested and lodged in the Putnam County Jail following an interview with Indiana State Fire Marshal investigator Jeffrey Ramey II at the Greencastle Police station in which the suspect reportedly confessed to setting the pre-dawn fire at 117 E. Summit St.

According to court documents, Lawless told the fire investigator he started the blaze by lighting a wadded-up piece of paper with his cigarette lighter and placing it on the charcoal grill that was on the back porch of the residence of estranged wife Kylie Lawless.

He told Ramey that the grill then somehow fell over and caught the deck on fire.

Ramey then asked Lawless why he started the fire, and the suspect confided that he was "trying to get Kylie's attention."

He also told the fire investigator that he knocked on the door several times but Kylie would not come to the door. He said he was "not trying to hurt or kill Kylie, just trying to get her attention," according to the incident report.

In court Tuesday, Lawless had a preliminary not-guilty plea entered on his behalf. Attorney Sid Tongret was appointed as his public defender and a pretrial conference in the case was set for 10 a.m. Aug. 25.

Putnam County Prosecutor Tim Bookwalter asked that bond be set at $30,000 cash-only, considering the nature of the charges and threats the defendant has reportedly made. Judge Page granted that bond and also issued a no-contact order for Lawless relative his "soon-to-be ex-wife," as he called her when the judge asked if the defendant had any problems with the no-contact decree.

The June 19 fire at the one-story Bainbridge home was reported at 3:14 a.m. The first unit on the scene reported "black smoke venting the entire structure with heavy flames coming from the northwest side of the structure," the Indiana State Fire Marshal's incident report noted.

The deck sustained major fire damage, including damage to a plastic doghouse filled with straw. The occupant advised that the charcoal grill had not been used in more than two weeks and said she did not even know how to light it.

The roof collapsed in the northwest bedroom, kitchen and living room.

Investigator Ramey asked Kylie Lawless what she was doing at the time of the fire, and according to his report, she replied that she was in bed asleep. She said she woke up when she became too warm and then observed smoke coming from the bedroom closet.

Seeing that, she got up quickly and went out the front door, where she observed the northwest corner of the house and the deck on fire.

She told investigators she was in the middle of a divorce and that her husband "had threatened to kill her when she told him that she wanted a divorce," the report noted.

For two weeks thereafter her father stayed with her because she did not feel safe alone. He had only left the home a few hours prior to the fire.

She also reported that the suspect showed up at the house prior to the fire department leaving the scene that morning and was visibly upset because their dogs had died in the fire.