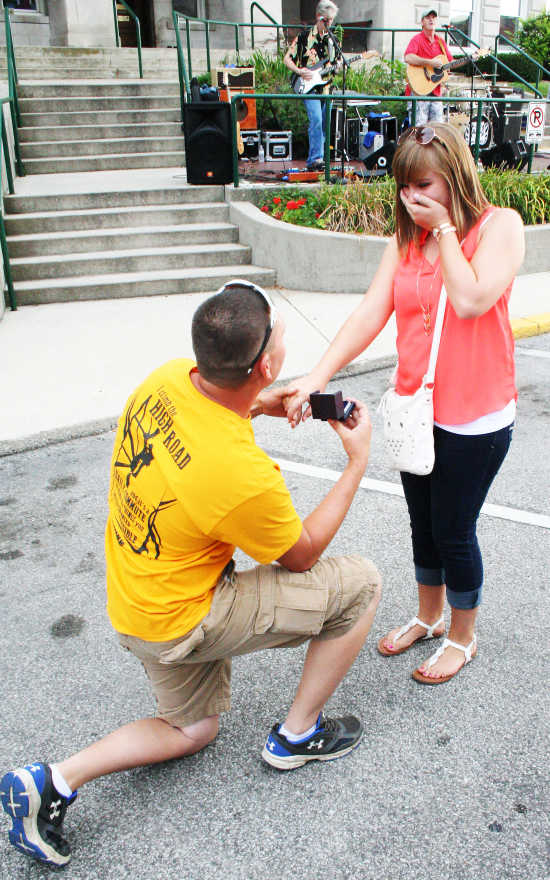 Banner Graphic/ERIC BERNSEE Down on one knee in front of the bandstand Friday night, Brandon Vaughn asks Ashley Ross to marry him. Of course she said yes, much to the delight of the First Friday crowd on the Greeencastle Courthouse Square.

First Friday on the courthouse square in Greencastle has become a monthly place to eat, drink and be merry while co-mingling with friends and neighbors.

But this past Friday night, First Friday logged a true first -- a marriage proposal on the square.

As the Philip Stevens Open Road Band cranked out the country song "Boondocks" by Little Big Town, bridegroom-to-be Brandon Vaughn, 25, and his band of co-conspirators began to put their proposal plan in motion.

Buddies Hank Goldman, Dane Nelson and Colby Judy moved in to preoccupy bride-to-be Ashley Ross, 25, dancing around and with her in front of the band. Meanwhile, Vaughn pulled a ring box out of his pocket, sneaked into position, took Ross' right hand and got down on one knee in front of the bandstand.

"I said, 'Will you marry me?'" Vaughn, the son of Brent and Elizabeth Vaughn, of Coatesville, recounted for the Banner Graphic later. "Hey, I'm a pretty simple guy."

"It was awesome to do it there where everybody could be a part of it," he added.

The only glitch in his plan was that the band didn't have the music to play "Guys Like Me" by Eric Church to accompany his public display of affection.

Meanwhile, Ross admitted she was oblivious to what was about to happen.

"I was super shocked," she said.

She was just thrilled to be enjoying an evening out with friends and family, not thinking anything of the fact both sets of parents were there, too.

"Honestly, I suspected nothing," Ross said. "He thought I knew from a few little hints but I was completely blind to it.

"That was our first First Friday, too. I'd been wanting to go to one, and one of my best friends even asked that day, 'Are you guys still going tonight?' I said it all depends on when he got off work and all."

But work was the last thing on Brandon's mind as he plotted the big moment.

"All of our friends and family have been waiting for this to happen," Ross said.

High school sweethearts at South Putnam, the couple have been dating for seven years. He's a 2009 graduate, while she's a 2010 alum.

And if Ross, daughter of Brad and Jerilyn Ross, of Fillmore, hadn't said yes?

"That would have been embarrassing," the confident Vaughn, who'd had the ring for three weeks, agreed. "I knew she'd definitely say yes with everybody there."

But even after having a chance for it to soak in, there's no going back on her decision now.

Reaction to the public proposal "has been awesome," Vaughn assured.

Ashley and Brandon have not set a wedding date, although she said it will probably be in fall 2017.