Downtown Greencastle is welcoming the addition of two new dining establishments to what has become a growing stable of local restaurants around the courthouse square.

Today (Monday) marks the scheduled opening of Tap House 24 at the southwest corner of Indiana and Walnut streets, while the Wasser Brewing Co. is open on a weekend basis for now. 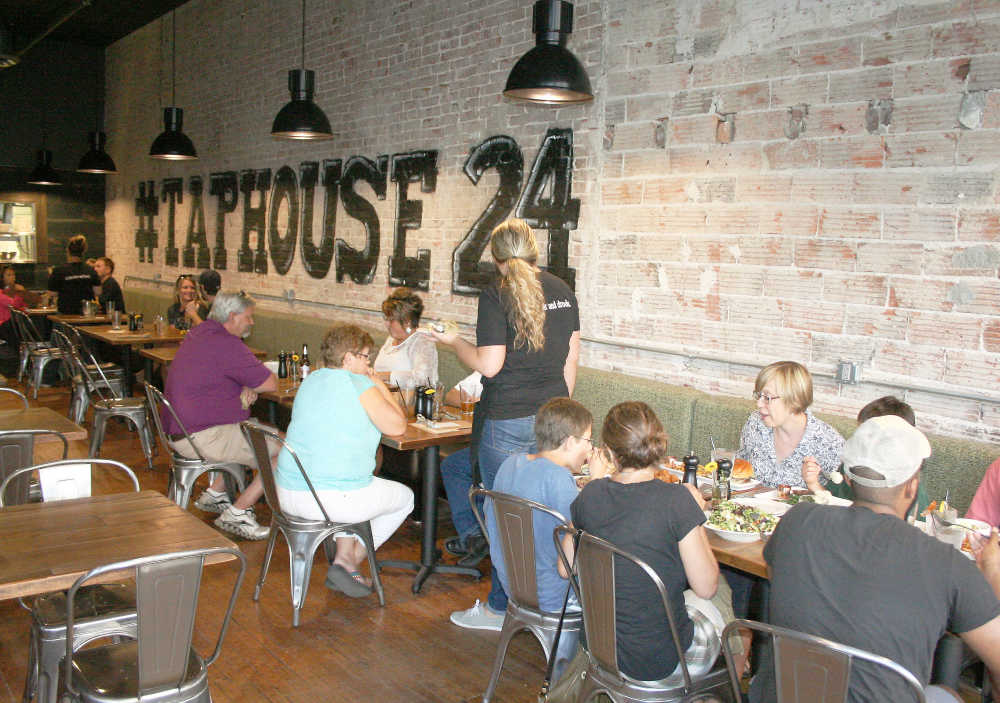 Banner Graphic/Eric Bernsee Diners take advantage of the food and drink offerings at Tap House 24 Saturday evening as waitress Haylen Eccles of Cloverdale waits on Judy and Lester Wilson of Greencastle along the north side of the new restaurant. 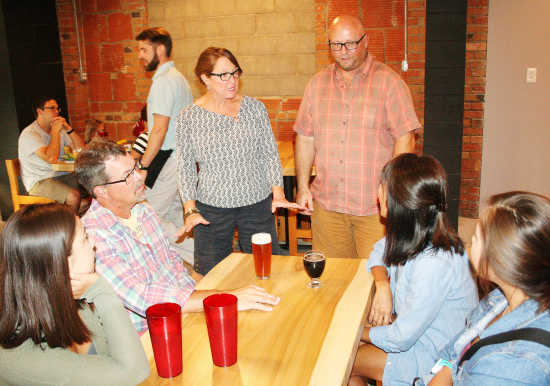 Those weekend hours will be in play for about a month at Wasser as construction work continues on the kitchen and interior, along things have progressed nicely, the owners noted.

"When most people walk in, their first reaction is, 'Wow!,'" owner Chris Weeks said as customers' attention is drawn to the unique lighting, the open trusses that were uncovered during renovation and the sheer amount of space inside.

"Opening it up adds a great deal of charisma to the building," Weeks added, noting that the place "was packed" for dinner on First Friday.

That interior work will include building a stage in the middle of the east wall of the dining room, Weeks said.

That will allow musical performances to take place with that beginning at 9 p.m. Saturday, Aug. 13 with the local band Black Market Vinyl playing its first Greencastle show at Wasser. Opening for the band will be Dogmatics members Julianna Goldsmith and Istvan Csicsery-Ronay.

Meanwhile, Chef John Conrad is presenting a menu of small plates featuring a hummus platter, fresh guacamole or salsa and chips, sandwiches including a variety of sliders, a chicken BLT and bratwursts until the kitchen is finished for bigger entrees.

Another aspect unique to Wasser opening locally is the availability of purchasing growlers of beer.

"There is no other brew pub in the radius from Lafayette to Bloomington, Terre Haute to Plainfield, for take-out, brewed-in-house beer," Weeks stressed.

Meanwhile, Tap House, with 24 craft beers on tap at 24 S. Indiana St., hopes to bring people from all around Indiana to experience the revitalization of the downtown area.

"We are committed to providing our guests with an exceptional experience from the contemporary industrialized design, comfortable and relaxed atmosphere to your choice of 24 taps of craft beer," officials have said.

With a contemporary storefront that celebrates humble materials, Tap House 24 features exposed brick, reclaimed wood and an added bonus of garage door windows to blend the outdoors with the interior during the warmer months.

Chef Josh Cunningham and General Manager Danita Timmons are in charge of the establishment that is locally owned and operated by Dora Hotel Co. (the same by Fishers-based folks who operate the Inn at DePauw).

Cunningham comes to the pub with years of experience and professional training at the Cordon Bleu School in Baton Rouge. Timmons is the former operations manager of Three Pints Brewing and brings a vast knowledge and a well-versed skill set of craft beer.

The restaurant will serve unique and seasonal dishes -- bacon-wrapped meatloaf for one -- with an emphasis on local flavors.