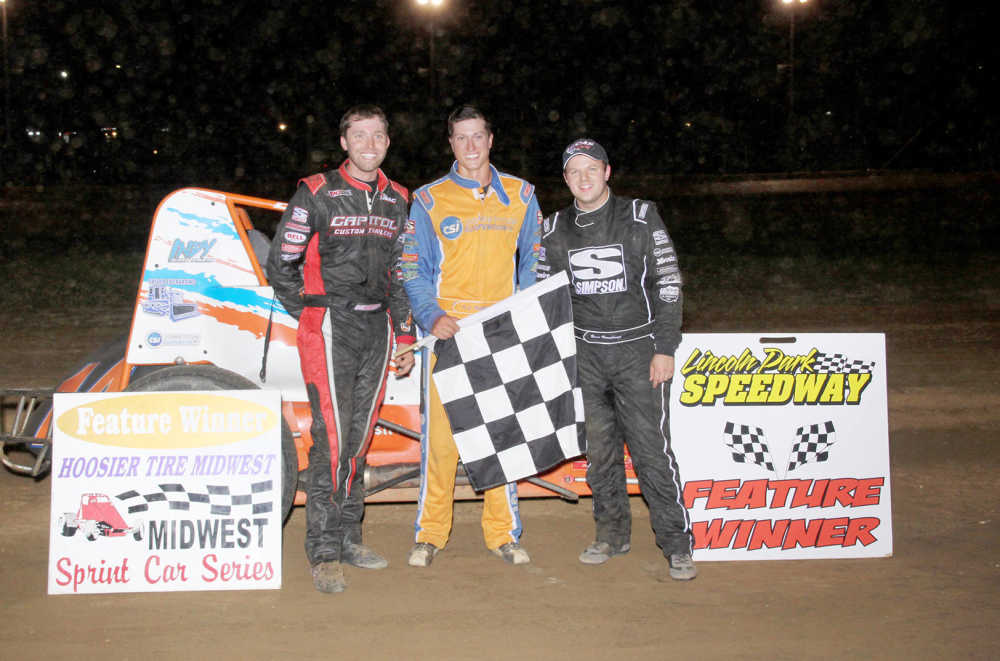 The Midwest Sprint Car Series was on hand Saturday at Lincoln Park Speedway as AJ Hopkins (center) took the $3,000 victory ahead of Brent Beauchamp (right) and Chad Boespflug (left).

PUTNAMVILLE -- The Midwest Sprint Car Series visited Lincoln Park Speedway for the final time as 28 sprint cars unloaded in pursuit of the $3,000 top prize at the Putnamville oval.

A.J. Hopkins has had his share of bad luck this season with early year motor problems, but on Saturday night his power plant was top notch in scoring an impressive win in the 30-lap A-main.

Kevin Thomas Jr. was the quick qualifier to start the evening and it was C.J. Leary, Shane Cottle and Chad Boespflug claiming heat race victories. However, Hopkins served notice early on that he would be a threat to pick up the win. He led most of the second heat race by ripping around the cushion of the 5/16th-mile track before a final lap bobble allowed Cottle to get past for the victory.

There were no such mistakes with the big money on the line later on Saturday night.

Hopkins and Brent Beauchamp started on the front row and fought for the top spot over the opening five laps before Hopkins took over the lead. Once he got out front, Hopkins built a sizable lead by the 10th lap. Behind him, Beauchamp was being tested by Boespflug and Kyle Cummins with C.J. Leary in tow.

By the midway point, Hopkins caught the back of the field and began to work through traffic as Beauchamp was able to slowly make up some ground. With 10 laps remaining, Beauchamp had closed the gap by joining Hopkins on the top side as Boespflug, Cummins and Leary remained in the top-five.

On lap 25, Hopkins slung his No. 14 sprinter into turn four and hopped the cushion briefly as Beauchamp got within three car lengths. However, Hopkins stood back on the throttle to regain his momentum and pull out to the victory. 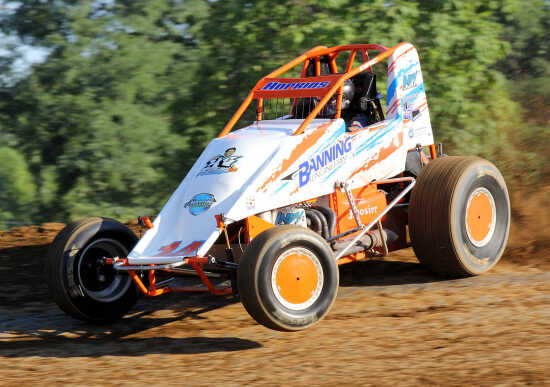 AJ Hopkins rockets around the top of turns one and two at Lincoln Park Speedway while leading his heat race. Hopkins would go on to pick up the Midwest Sprint Car Series victory at LPS on Saturday.

Terre Haute's Josh McDaniel has had his own share of poor luck during the season with some mechanical issues scattered throughout the season. All of that washed away this weekend as McDaniel held off serious challenges from Kenny Carmichael Sr. over the duration of the 20-lap UMP Modified feature to score the first feature win of his career.

McDaniel set himself up well by winning his heat race and starting on the pole for the A-main. He wouldn't relinquish that spot as he remained out front, navigating a slicked off racing surface to perfection. Carmichael pulled even with McDaniel over multiple laps entering turn one, but McDaniel was able to ride his momentum back into the lead each time.

Jay Humphrey Jr. started and finished third while Kenny Carmichael Jr. made up some ground by getting by Travis Shoulders late to finish fourth after a 14th-place starting spot. Derek Groomer's streak of four wins in a row at Lincoln Park Speedway came to a close when a spin in his heat race forced him into the B-main. He won that race and started 16th in the A-main where he came forward to place eighth.

Steve Peeden moved into the lead of the United Midwest Promoters national points standings recently and he added his second super stock win of the weekend after claiming the victory at Bloomington Speedway Friday evening. On Saturday, Peeden had his work cut out for him after starting 10th but powered through the field.

Josh Boller was slated to start on the pole of the feature, but had to return to the pits before the opening green flag with a wheel problem. He made it back to the track, but was forced to re-start from the tail of the 20-car field.

When the field took the green flag, Chris Hillman led the first five laps ahead of Kris Starks as Peeden made his way quickly to third ahead of a door-to-door battle between Jonathon Newgent and Wes McClara.

By lap 10, Peeden was challenging Hillman for the lead and would make the pass just one lap later. Once out front, Peeden preceded to pull away for the victory. Hillman came home second and Carmichael Jr. finished off an impressive effort by placing third after starting 20th. Newgent finished fourth ahead of Doug McCullough.

In the bomber A-main, James Walters recorded his second straight feature win in the division by holding off Cody Wright once again as Curt Leonard placed third ahead of Ryan Freeland and Josh Litton.

Leonard led early ahead of Walters and Jordan Almanza before Scott Crouch and Almanza became tangled in turn one to bring out a caution.

When the field took the green once again, Walters and Leonard were battling side-by-side on lap seven as Freeland and Wright sought third-place ahead of David Wallen and Kyle Krupa. Walters was able to take over the lead on lap nine with a strong run coming off of turn four. From there, Walters finished off his second victory as Wright came home second ahead of Leonard.

Justin Litton would pick up the win in the second bomber feature as Keivan Clodfelter placed second ahead of Ray Walters.