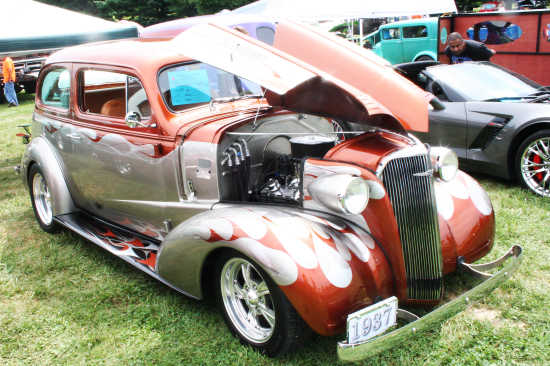 Overall 144 cars, trucks and motorcycles were on display as the Children's Miracle Network event, organized by employees of the Walmart Distribution Center, raised $10,200 for Riley Hospital for Children at Indianapolis.

Several local car owners were represented. Don Kiger, who only lives up around the corner on Hilltop Lane, brought over a pair of 1931 Fords. Local dentist Perry Wainman had at least two Ford Mustangs in the car corral, while Beetle maniac Dick Funk of Greencastle showed a 1958 VW and Phil Humphreys provided one of his cherished Cushman bikes for the new motorcycle section. 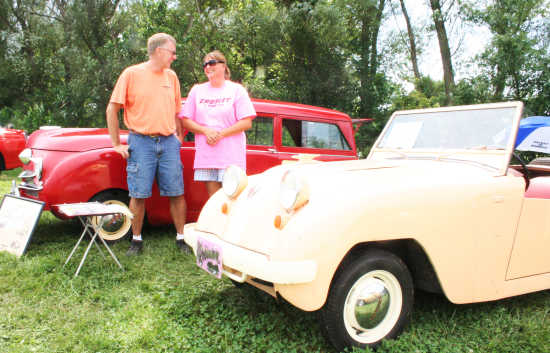 Banner Graphic/ERIC BERNSEE A pair of rare Crosley cars, owned by Brian and Chris Nees of Cloverdale, are exhibited Saturday at the Putnam County Fairgrounds during the annual Children's Miracle Network car show in support of Riley Hospital for Children.

Art Tincher of Greencastle stopped traffic with his 1924 Studebaker Touring Car, colored in a unique 24 Genesee blue that Tincher said he finally found after hunting for the proper paint codes for months.

The restoration literally was done from the ground up.

"Body out ... trans out ... motor out," Tincher explained. "Basically I tore it down and built it back up." 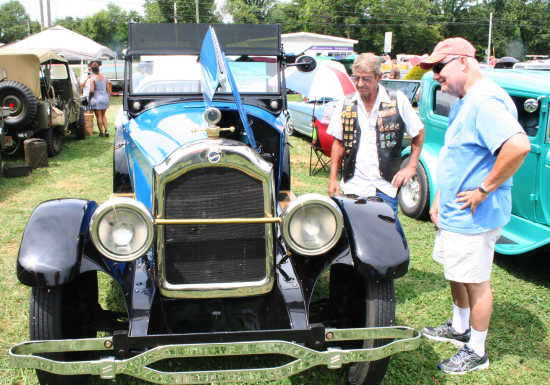 Restoring the Studebaker, which he bought three years ago, was a true labor of love for Tincher -- not only for the car itself but for occupying his time during his son's three-year infantry deployment to Africa.

The goal, he said, was "keeping my mind off of him during that time. He didn't think I'd ever get it done.

"But I tricked him" Tincher said, "and I got it done before he got home."

And when he made it home, his son text one afternoon to say, "Dad, I'm driving your car."

Tincher said he responded with, "that's OK, that's why I left the keys in it."

"Not that one," came the son's reply, "your Studebaker."

"The tires were stock on that car," Tincher said. "The only thing that wasn't stock was those steel wheels. They were a $5 option back then."

"But I can climb Newport Hill in third gear," says Tincher who has badges all over his vest to prove it.

He says he's not stuck on Studebakers, but his last three renovation projects have featured them, including a 1927 Studebaker Decatur he recently bought for another project to do while his son has been redeployed to Africa.

Earlier he restored a 1925 Studebaker President, calling it "the only one left in existence." A museum-worthy piece, it's sitting in his garage.

"My problem is I have too many old cars," Tincher added. "But to me, there's nothing more fun than to hear those old cars talk to you again when you fire them up."

On the south side of the display, Chris and Brian Nees of Cloverdale displayed a pair of unique his-and-hers Crosleys -- a 1948 stationwagon (his), painted lipstick red and trimmed in cream, and a 1952 Supersport convertible (hers) which was supposed to be the peachy color of a Dreamsicle but came out like "desert storm sand," Chris Nees said.

The restoration took two years. The cars "were all in boxes, we did it piece by piece," she noted.

"It took a lot of tea, a lot of coffee, a lot of beer and a lot of cussing but we got it done -- and we're still married," Chris Nees laughed.

"It's never going to be sold," Brian Nees asserts. "It's going to the kids. It's a family heirloom now."

Not that Chris Nees hasn't had to fend off offers for the snappy Supersport.

"There's a guy that meets me at Newport every year and says, 'I've got my checkbook, how much you want for it.'"

It's all in fun, not profit, Chris Nees noted.

"We get it out in Cloverdale for our Cloverdale Christmas parade, and if I see one kid point and look, it's all worth it."

The Crosley was built by Powell Crosley who owned WLW radio in Cincinnati and the Cincinnati Reds (remember Crosley Field). He made his money selling radios and small electronics. Yet there isn't a radio in either car.

"It's ironic," Chris Nees says, "that he made radios for everyone to afford, and we can't afford to get one that doesn't even work to put in here. It's about $400 for a broken one."

The Cloverdale couple are members of the Bent Rods Club of Cloverdale, which captured the award for most members present Saturday with 30 entries.

Organizer Larry Hall issued a "special thanks to Chris of Krambo's Kustom Kolors for promoting our first show with motorcycles and bringing out some incredible bikes."

Individuals winners at the car show were: