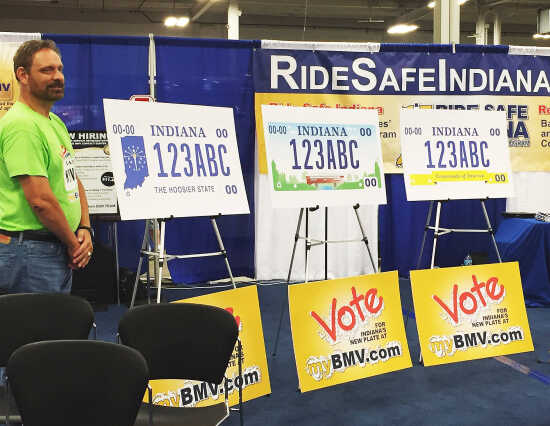 INDIANAPOLIS -- Indiana residents now have the chance to decide what our next state license plate will look like as they vote on a final design to replace the outgoing bicentennial plate.

"This is going to be a fun process for Hoosiers during the next four weeks," Abernathy said. "We have three interesting designs and I hope all state residents will vote and let us know which one they like the best," he added. "The winning design will appear on vehicles all over Indiana."

The three designs for the public vote are:

-- A blue, red and green plate depicting a covered bridge over a creek.

-- A white, blue and yellow choice with a torch and stars over the silhouette of Indiana and the slogan "The Hoosier State."

-- A plate with a white background, blue numbers and a yellow, bottom border with the slogan, "Crossroads of America."

Indiana's Intellectual Technology Inc., a Fort Wayne firm that designs and manufactures license plates for states all over the country, did the artwork.

Residents can vote for the plate at https://secure.in.gov/apps/bmv/pick-a-plate/#/vote and at the BMV State Fair display in Exposition Hall through the end of the fair.

Voting ends at midnight on Sept. 5.

Hoosiers will begin to see the winning plate design on vehicles in January of next year as older plates are replaced at the end of the normal seven-year life cycle.

The new design plate can also be purchased before the end of the life cycle for $10.25.