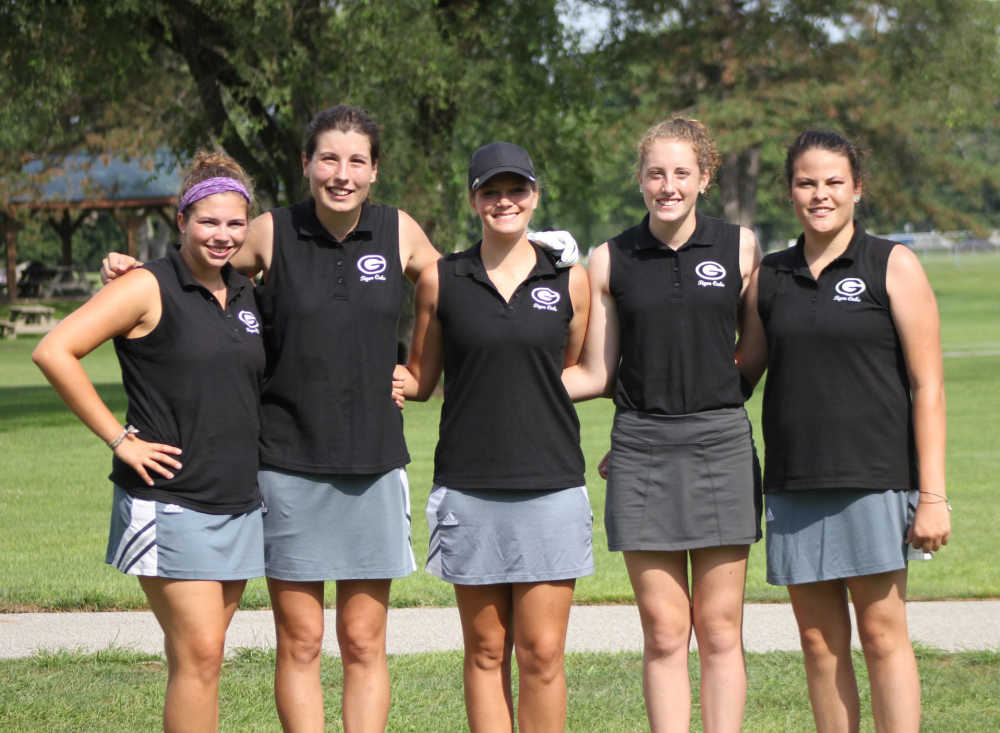 Greencastle will look to improve upon its first two performances of the season today by meeting North Putnam and Lebanon at Windy Hill, while Cloverdale will take the course for the first time Tuesday by hosting Northview and Linton at Clover Meadows.

Here is a look at two of the four local teams:

The Tiger Cubs defeated Monrovia by 20 strokes last Monday in their season opener, and finished sixth among eight teams in the Braves' Invitational the next day hosted by Terre Haute South.

Greencastle coach Bob Hedge noted that his team, like every other one in the state, was hurt by the short window of practice time available.

The first official practice date was July 29, and the first date for matches was August 1.

"I wouldn't say I'm disappointed, but I was hoping for better results in the South Invitational," Hedge said. "Especially since we finished the season so well last year. The way the season is set up, you really don't get to practice before matches start. Girls can practice on their own, but for the first couple of matches that makes it really difficult."

Hedge said last week that the opportunity to have practice as a team has made a lot of improvement.

"The last couple of days have had really good practices," he said. "I'm really looking forward to seeing how we play [today]. We're not looking at last week's matches any more, but just looking ahead."

Senior Alex Weliever has led the Tiger Cubs with the low score in both outings so far, and is one of four returners back from last year.

Junior Rose White is new to the team, and completes the five-player roster.

The four returners each made the all-Putnam County team last year.

Masten has not yet played at the same level as last season, but Hedge knows it's a matter of time before she does.

"She had a pretty good season last year," he said. "We're just waiting for her to break out."

Greencastle placed third in its first-ever appearance in the new Western Indiana Conference tournament, and Hedge is hopeful that his team can continue and even improve upon that success.

"That was kind of a surprise I think to some teams," he said. "Now we have several girls back who played in that tourney, and have a better idea of how it goes.

"I don't know a lot about all the teams," Hedge admitted. "We went head to head with Northview on Tuesday, and we were able to play a few strokes better than they did. Our goal is to finish in to third or better in the conference."

Hedge knows his team has a tough job ahead of it come tournament time in just a few weeks, as the Tiger Cubs will be competing with the much larger Terre Haute schools in the sectional.

"We had three players who were tied two stokes back from qualifying as individuals," Hedge noted. "It's a tough sectional, and it's really hard to get the team out.

"Our goal is to make the top three, but that's a hard goal to reach.

"Once we start playing to our potential, we had a chance to get one or two players to advance from the sectional."

Clovers' head coach Matthew Langdon also has a veteran squad with even better numbers than Greencastle.

"We have nine players, which for this area is pretty good," he said. "All six of our players are returning from last year."

The 2016 Clover squad consists of:

Langdon's team was not able to go to the Terre Haute South tourney, and like Hedge feels his team has benefited from the practice time.

"We will have six practices in before the first meet, which is rare," he said. "That is good for us."

Langdon said the goal around the area is to get as close to 200 as a team as you can, and that will compete in the county," he said. "We have had three or four scores around the 50 mark in practice, which is pretty good this early. Our progress has been good."

Langdon noted that Walker played in some summer tournaments, and that's a progression he would like to see continue.

"We are moving toward getting more in the summer and more 18-hole play," he said. "A lot of them practice only nine holes a lot. Hopefully in the future they will head in that direction."

Langdon said this year's turnout is the most players the team has had in 10 years.

"Interest is going up," he said. "It's starting to look up."

Langdon echoed Hedge's sentiments that team advancement from the sectional is still difficult, and he also has some individuals he feels -- such as Abby Speas and Abby Walker -- who will be fighting for the three advancing spots for players from non-qualifying teams.

"They have been working toward that," he said. "They have both shot 45 before, and it's really about being able to put two good nine hole scores together in the big tournaments.'

Langdon noted that Shrum, whose sister (Sidney) was a Division I competitor at Valparaiso, is a "wild card" who has also shown great promise.

"She's capable of breaking 50 also," he said. "If you break 90 in the sectional on given years, you put yourself into position for one of those advancing spots."

The Eagles will open their season on Thursday by hosting North Montgomery, and will be previewed (along with North Putnam) later this week.