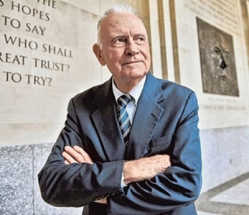 Now that the conventions are over, all eyes are on the fall presidential campaign. But I'm going to ask you to shift your focus a bit, to Congress. Don't do it as a favor to me. Do it as a favor to the country.

Congress is in the midst of a seven-week break. Its members left Washington in mid-July; they'll be back after Labor Day. They did manage to do a few things, like pass legislation providing resources for combating the heroin and opioid crisis.

But what they left undone is astonishing. They departed without dealing with a $1.1 billion measure to combat the Zika virus. They didn't take up immigration or tax reform or gun legislation. They left behind a pile of spending bills, which means they'll have about four weeks once they return to figure out how to keep the government operating. Yet again.

We're all tired of this. I don't think a day goes by when someone doesn't ask me, "What can we do about it?" Let me tell you.

First, the system can work. What we've seen in recent years on Capitol Hill does not need to be the future. But it takes skill to forge consensus, make trade-offs, assuage egos, and accommodate the vastly different points of view that are inevitable in a diverse nation. And it takes determination to overcome the inevitable setbacks and stumbling blocks in order to govern.

The problem is, Congress has shown virtually no interest in this. Its members are very good at attacking political opponents, and not so adept at governing.

So what kind of qualities would produce a more productive body? Members who have a sense of responsibility to the country and to the institution envisioned by our Founders; who understand their role in making Congress an effective institution; who cooperate across the aisle; who can construct and pass a bill; who know how to legislate in order to effect change, not merely score political points; who want to safeguard Congress' role as a co-equal branch of government, not pass power to the president, the Fed or the bureaucracy.

Many current members of Congress have never seen these qualities in action, but the committee rooms and chambers they inhabit certainly have. Sam Rayburn of Texas brought rural electrification into being and transformed the lives of millions. George Fallon of Maryland shaped the Interstate Highway System, which in one way or another has affected every American life. Democrat Emanuel Celler and Republican William McCullough brought civil rights legislation to the country. Edith Green of Oregon was the mother of Title IX. Talented legislators -- Carl Albert, Mike Mansfield, Barber Conable, Louis Stokes and Lindy Boggs -- were skilled at helping their colleagues see their way to compromise; they took pleasure in making Congress work. And it wasn't just leaders. The success of Congress over the years has depended upon members who were not well known but who took their responsibilities seriously and believed the institution simply had to work.

We've had a functional Congress before. That means we can produce one again.

But I choose those words -- "we" and "produce" -- carefully. Making it happen depends on you. As a voter, you have to go beyond asking about the candidates' positions on substantive issues. In addition, you have to judge whether a candidate has the will and the capability to reassert the role of Congress, to get legislation passed and to work with colleagues who don't necessarily agree with them.

My fear is that, just as many contemporary members of Congress have never seen an effective Congress and show few signs of knowing how to make it work, perhaps voters have simply stopped expecting it. Voters have legitimate reasons to be discouraged about Congress. But they should remember the recent past, which shows that with the right kind of legislators, Congress can get things done -- and they should begin to reject politicians who have proven again and again that they can't get anything done.

Lee Hamilton, a 1952 DePauw University graduate, is director of the Center on Congress at Indiana University. He represented southeastern Indiana as a member of the U.S. House of Representatives for 34 years.