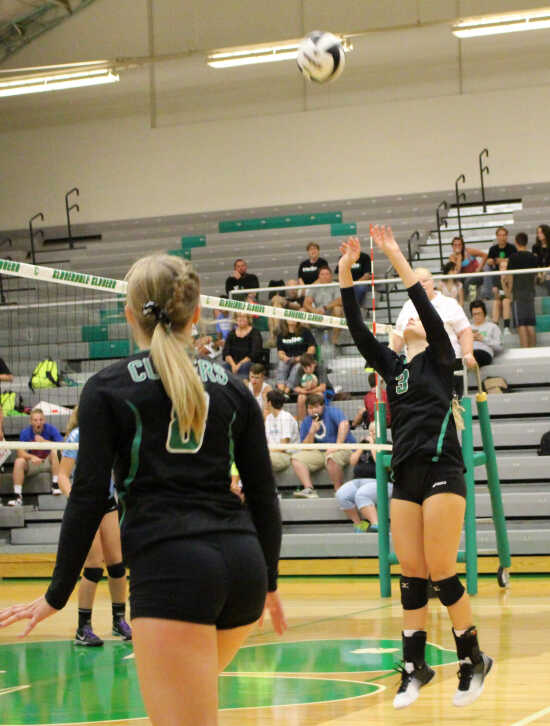 Hannah Rady of Cloverdale makes a set against Clay City.

Hannah Rady had a season-high 21 points, five aces and 37 set-assists

"It was the best match we have played all year," Clover coach Kathy Moore said. "We changed the lineup just a little and they girls just played their hearts out. It was our first win of the season and it was a fight tooth and nail with West Vigo."

Leading the Clovers offensively was Rady and Stoltz with four points each, while Thomas added three and Lauren Meek one.

Combs paced the Clovers with five kills, while Stoltz added four, Wade had two and Thomas and Monnett added one each. Rady had eight set-assists.

Defensively, Combs had one block, Thomas had six digs, Meek and Stoltz had five digs each, Monnett four digs, and Simpson and Combs added three digs each.

"We played well the first set and had some good things happening," coach Moore said. "We really struggled with serve reception and just couldn't recover the rest of the match."

Bailey Shuee and Sarah Miller each had seven kills to pace the Tiger Cubs, while Jayln Duff and Lydia Trout each had 10 assists.

Madison Trout had 13 digs, while Maggie Meyer had 13 digs and five aces.

* North Putnam 3, Southmont 1 -- At Roachdale, the North Putnam girls' team improved to 3-0 on Thursday with a 3-1 win over Southmont.

* Greencastle (boys) 1, Crawfordsville 1 -- On Tuesday at DePauw's Boswell Field, the Tiger Cubs got a first-half goal from Seth Nichols on an assist from Evan Crowe.

* North Montgomery (boys) 7, North Putnam 0 -- The Chargers took a 6-0 lead at halftime and maintained the shutout for the victory.

Goalie Aidan Millican had 22 saves on the night.

"We had a slow start to the game and North Montgomery took advantage of that by scoring two goals in first 10 minutes," NP coach David Moeller said. "After halftime, we came out with better energy and competed much better in second half.

* Eagles win first -- South Putnam's Alicia Haywood and North Putnam's Taylor Dixon each shot a 50 on Tuesday to tie for meet medalist honors as the Eagles and Cougars met at Clover Meadows.

South Putnam won the team competition due to North Putnam not fielding a full team of four players.

Anna Carrington and Reagan Ladd each added a 64 for the Eagles while Kristi Wood had a 71.

North Putnam got a 56 from Emily Eltz, and also welcomed newcomer Jadin Nunez to the team.

"The girls played pretty well," SP coach Kevin Metz said. "However, a few of them were a little disappointed with a few bad holes. Alicia and Kristi both played well, but neither was happy with her score.

"Anna struck the ball very well and scored much better," Metz added. "Reagan again played well for us, and I'm very happy with the progress she's made this year."

North Putnam coach Linda Patrick knew there would be a big competition between Dixon and Haywood for medalist.

"They are good friends and are both always close in scores throughout the season," she said. "I'm happy that they tied for medalist."

Patrick noted that Eltz was a few shots above the previous meet, but she has stayed consistent.

"Emily is managing to keep in the mid-50s as we approach the WIC conference on Saturday," she said. "Jadin got her first chance to experience a course meet and will become a good addition to the team."