Greencastle's high school soccer fields now have shelters for both teams and the officials. The project was initiated and carried out by GHS senior player Whitney Weinschenk, as part of her efforts to promote skin cancer awareness.

High school athletes are frequently encouraged to stay hydrated, eat the right foods and get a proper amount of sleep in order to be healthy and perform at the optimum level.

Greencastle senior multi-sport athlete Whitney Weinschenk noticed that skin cancer prevention instruction was not normally included in the traditional safety package, though, so she decided to do something about it.

In order to achieve a Girl Scouts of America Gold Award (similar to Eagle Scout designation in Boy Scouts), Weinschenk has taken on the implementation of a multi-faceted program to both make people aware of the frequency and dangers of skin cancer and to construct shelters for the field where her high school team plays.

Weinschenk, an Ambassador with Greencastle Troop 59 of the Girl Scouts of Central Indiana, said that most people know someone affected by the disease. Since several people close to her have been affected, she wanted to help the problem.

"During my project, I hope to raise awareness through presentations to the athletes, their parents and the fans of Greencastle High School Athletics, as well as the athletes, parents and fans of athletic programs from other schools," she said. "My uncle, grandfather and former track coach have had it, and I know a lot of people who are being watched for it.

"It's the most common type of cancer, and this project is kind of a personal thing."

The worst form of skin cancer, Weinschenk said, is called metastatic melanoma. This type consists of small tumors that can spread to the brain and other organs.

Weinschenk noted that sunscreen, if applied correctly and over SPF 30, can help to prevent skin cancer.

"But if you're sweating a lot, it can get wiped away pretty quickly," she said. "The problem is that people don't think about it. Kids think they're immune to it and they won't get it."

Weinschenk has learned many new things about skin cancer through the project, but one stands out to her.

"Everything you do as a kid affects it," she said. "I have learned that if you get a sunburn before a certain age, that you are more likely to get skin cancer in that place on your body later in life."

The first part of her project is an educational component involving the promotion of Skin Cancer Awareness. To accomplish this, she formed a partnership with Hendricks Regional Hospital, whose representative joined her for a presentation on skin cancer prevention at the annual Greencastle High School All-Sports Rally earlier this month.

Along with presenting information, Weinschenk and the hospital officials also acquired and handed out samples of sunscreen to attendees of the All-Sports Rally.

Weinschenk expanded her project with an offshoot idea that stemmed from the original thesis.

"In collaboration with the Putnam County Hospital Cancer Center, the Greencastle Parks and Recreation Department and the youth sports leagues utilizing Big Walnut Sports Park, we are working to provide sunscreen dispensers throughout the municipal parks system and other locations around the community," she said. "Our timeline goal for locating these dispensers is during the spring of 2017." 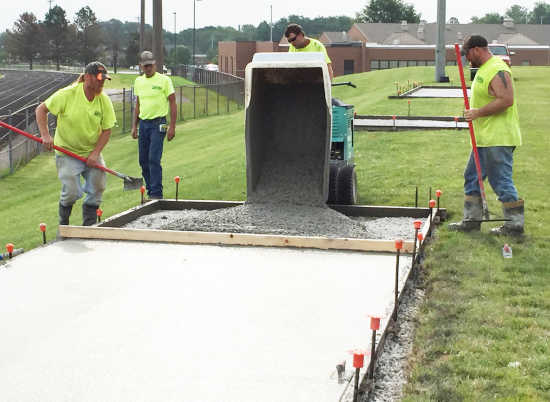 The concrete crew from Spiker Excavating donated its services to prepare and pour the floors for each of the shelters which will shade the players and officials on the Dee S. Monnett Soccer Field on the GHS campus. Led by Gary Jones, the crew included Russell Benson, Justin Dickerson and Bob Buis driving the Georgia Buggy.

The most labor intensive component of the project is the construction of sun shelters for the players, officials and trainers at the Dee S. Monnett Soccer Field on the GHS campus.

Numerous local businesses and individuals either provided large discounts or donated money, supplies and time toward the project.

The full cost of the three shelters would have been $12,000 without the benefit of the local assistance, but that amount has been whittled to just $3,500.

In addition to her fundraising efforts, Weinschenk has applied for a Putnam County Youth Philanthropy Grant to help with the funding.

"I'm still waiting for the answer on that," she said.

Weinschenk's inspiration for the shelters at the school came from years of personal experience.

"You don't realize how long you're out in the sun until you think about it," she said. "You can be in the sun for as long as six hours on a match night.

Weinschenk admits that her role in the actual construction was minimal -- "screwing in a few bolts and hauling wood" -- but she has learned many things in the process that will help her throughout her life.

"One thing I have learned really well is how to overcome obstacles," she said. "We have had a lot of hoops to jump through, and a lot of unforeseen expenses and things like that.

"I have learned how to organize things from doing this project," Weinschenk added. "I have also learned how to talk to and interact with professional people, and how to do that well. It's been very beneficial for me."

Upon completion of the project, a plaque will be attached to the central shelter naming any contributors both business, organizations, friends and family that have helped with the project. Additional photos and a news release will be published in the Banner Graphic.

Weinschenk said more funds are needed to fully fund the project, which is expected to be finished soon once guttering and a few other final touches are completed.

"Any amount would be greatly appreciated," she said.

*Joe and Jill Spiker from Spiker Excavating donated their time and services to spread rock and pour the concrete floor.

Donations are still being accepted to help cover the cost of the wood for the project. Anyone interested in donating can send contributions to: