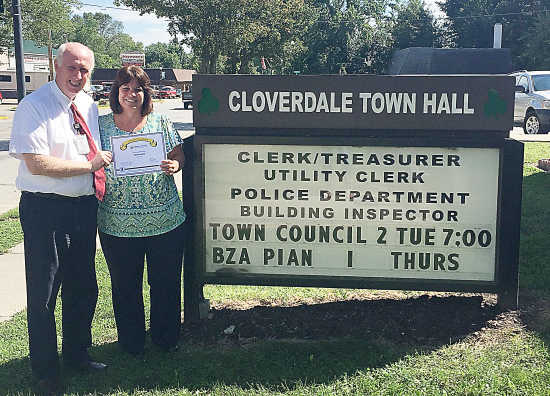 Courtesy photo Clerk-Treasurer Cheryl Galloway represents Cloverdale as it receives a certificate from Alan Plunkett verifying that the town has received the Community Crossings Grant.

The town council was just moving to a vote on whether to grant Clerk-Treasurer Cheryl Galloway permission to submit the town Proposed 2017 Budget when Monnett cut in.

"Should I go in here," Monnett asked, "or are you not going to motion on the submit so that I can at least ask for some money for the fire department?"

In an interview after the meeting, Monnett said CFD needs the funds for operating costs and equipment.

Looking at the hard-copy of the budget, Clerk-Treasurer Galloway responded that a town employee would have to take a pay cut in order to free up such funds.

"It would have to come out of there because (the budget's) down to the last penny," she said. "I've got $1,405,929 I'm asking for. Now whether the DLGF (Department of Local Government Finance) gives me that, that's another question."

Attorney Alan Yackey added, "Most of the time, by the time you submit this budget and it goes to the DLGF, it gets trimmed."

Clerk-Treasurer Galloway said that the contract between the town and the fire department provides $15,000 for 20 years, and that the council had agreed upon Monnett having to ask for additional funds each year. Last year's extra funding was made available from the Financial Institute Tax (FIT).

"This year," she said, "our budget is super-tight, as (the council) knows, with the Stardust (Road) $3 million (Community Crossings) Grant we're trying to get. So any extra money we have is going for that. So if (the council) can decide -- do you want Stardust Road repaved, or do you want to give the fire department money?"

Clerk-Treasurer Galloway said that she actually has to seek more funding for the project.

In response to a question from Vice President Don Sublett, Clerk-Treasurer Galloway said that Cloverdale has suffered a deficit in the amount of $10,000 from the poor assessed values announced in June.

"I'm not getting as much money as I have been," she said. "I'm at the lowest I've ever been. It's keeping the tax payers' money down for their homes, but when it comes to us we're getting cut."

"So you've got a whole host of things going on here," Yackey summarized. "You've got lower assessed values; you've got to factor that things get trimmed; you've got higher costs on a lot of things; you've got infrastructure that is aged and needs addressed; and you've got public safety needs. You're pinched. Other than community fundraising -- I don't know."

President Coweta Patton suggested, "I know one thing my husband said they did with Decatur Township was that every year the fire department sent out a letter asking for donations to everybody in the community. And they said they always got a very good response from that."

Monnett responded, "Yeah, five minutes ago you approved $2,200 for animal control and -- I guess that was my question. We found that money, but we can't find any for the fire department."

President Patton responded, "But the thing of it is too, there's people here that when animals in this town are running free, they call and say, 'We want you to take care of that situation.' So -- ?"

"Yeah," Monnett said, "just like when their house is on fire."

When asked about his plans moving forward in the post-meeting interview, Monnett said, "I haven't planned that far ahead yet. I have other plans that I'm working on, but I'd rather not say right now," but that he might have an update at a future meeting.

Citizens interested in donating the CFD can contact Monnett at 765-795-3174 or place their donation in Box 81 at the Trustee's Office, located at 151 N. Lafayette St.

A public hearing to review the Proposed 2017 Budget is scheduled for Sept. 13 at 7 p.m. in the Town Hall. The DLGF will not finalize the budget until December.

-- Improving Stardust Road/Ordinance 2016-12: Town Manager Wayne Galloway reported that the town's application for the Community Crossings Grant had been submitted to the state. At the time, results were not expected until Aug. 31, but Lt. Gov. Eric Holcomb and INDOT announced Monday that Cloverdale will be receiving $948,160.

The council also granted Town Manager Galloway permission to sign an engagement letter with London Witte Group, a CPA (certified public accountant) company that will serve as the town's advisor while it seeks bonds for the project. The company will be paid from the bond funds.

"This is something that came out of the State Board of Accounts," Yackey said. "They're trying to be helpful here, to give the town more options for sources of revenue for matching funds for the Stardust Road grant."

-- Building inspector: The council accepted a bid of $3,000 from Titan Construction & Engineering Services to demolish 353 W. Boone St. In answer to a question from Bennington, Yackey said that there is no guarantee the town will get its money back for the demoltion.

Clerk-Treasurer Galloway reported that the money is supposed to "go to volunteers for adopting the animals, to walk the animals and for utilities for the building."

The council did not, however, approve entering the four-year partnership mentioned last month, preferring first to see whether the town will benefit from sending the $2,200.

-- Ordinance 2016-11: The council approved Ordinance 2016-11 "Flood Hazard Areas for the Town of Cloverdale," which is an update on previous state law that defines and prevents the creation of flood hazard areas.

-- Anonymous tip hotline: Interim Marshall Charlie Hallam reported that the anonymous tip hotline mentioned last month is now active. Residents can reach it at 765-795-3800 ex. 5. Hallam advised residents to be as detailed as possible, since the police department won't be able to ask questions after the tip is left.

The next Cloverdale Town Council meeting is set for Sept. 13 at 7 p.m. in the Town Hall.