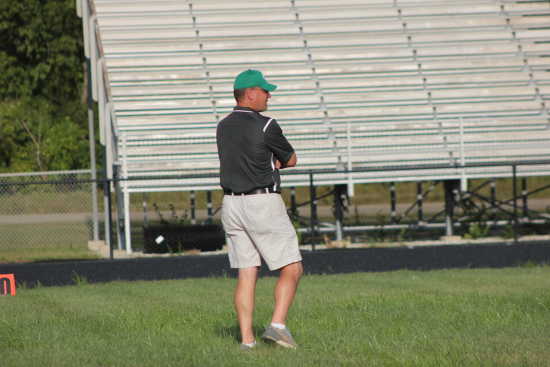 There isn't any pre-game trash talking.

No "Meyer Bowl II" T-shirts are being printed up.

Both downplay the genealogical significance of the event, and are treating the contest like any of their nine regular-season games.

Mike's Greencastle squad defeated Tony's Cloverdale team 56-6 last year in a whirlwind scenario during which both men took over their programs during the summer months and were limited in off-season instructional time.

Tony Meyer played against his brothers and his father while in college, so he's used to the increased emotion that comes with such an outing.

"To me, it doesn't matter who wins," he added. "It will be in the back of everybody's minds, though."

One might think today's date would be circled on each coach's calendar as the highlight outing of the season, but that's not the case.

If today's date is circled on Mike Meyer's calendar, it's just the second of at least 10 Fridays in a row that he highlights.

"I look forward to every game," he said. "He's my brother. Obviously both of us want to win, and both of are going to be competing the best we can.

"We're both going to coach our teams up and try to make things happen."

Although Tony's team was on the short end of last year's score, he seems to anticipate the contest the most.

"It's going to be fun," he said. "We have both played in enough games and been around the block enough times, that in the whole scheme of things it's not that big of a deal."

Tony Meyer noted that perhaps the only benefit from the game are family bragging rights around Christmas time.

Mike doesn't recall the "reminding," and prefers to focus on the game at hand.

"Our personalities are different," he said. "I don't know if I reminded him about it, but we are going to do the best we can do. We don't care who we are playing."

Both coaches know the contest is far more about the players in pads representing their schools than it is about them.

"I don't lose any sleep over losing to my brother or beating my brother," Tony said.