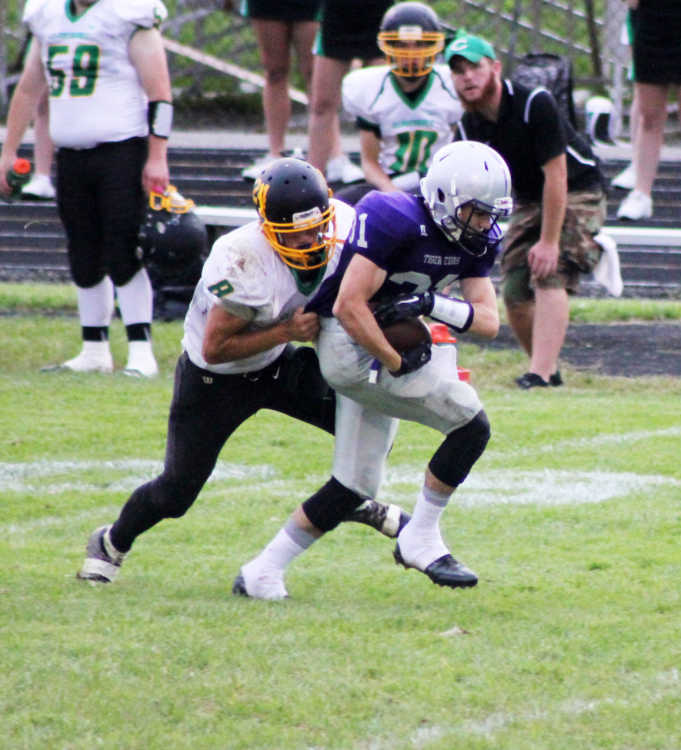 Greencastle senior receiver Tyler Edwards breaks away from Cloverdale's Drew Boyette for a 29-yard reception in the second quarter on Friday night.

Mike and Tony Meyer are brothers, but they are admittedly very different people.

Following Friday night's 46-0 win by Mike's Greencastle team over Tony's Cloverdale squad, their outlooks on the season after two weeks were just as different.

"I was very, very happy with our play," Mike Meyer said. "We played well offensively and defensively, we had minimal penalties, our kicking game was better, we ran the ball, Nick [Costin] threw the ball well and our defense pitched a shutout."

Tony Meyer thought his team performed far below its hopes and expectations.

"Our offensive line played about as poorly as one could," he said. "It was just shy of nonexistent. I'm not big on being negative, and I've tried really hard to be positive through last year and through all the workouts since then. But [Friday] was what I could categorize as a very big step backwards, and that's unfortunate."

The Clovers could only manage four first downs in the game, and were held to 108 yards of offense.

The Clover coach thought progress was made in the season-opening loss to South Putnam, and Friday's effort surprised him.

"We didn't expect it," he said. "I really thought we would be on a high note, and unfortunately we struck about the lowest cord we could."

Tony Meyer in no way credited his team's poor performance as being the sole reason for the lopsided score, which was 19-0 after one period, 33-0 at halftime and 39-0 after three quarters.

"That's not taking anything away from Greencastle," he said. "Devin Clar is a rock star -- he just beat us up and down. They didn't need to do anything else.

"I would have given it to him 50 times," the Clover coach said. "We sure as heck couldn't stop him."

Clar, a 6-0, 205-pound senior, carried the ball 21 times for 161 yards and three touchdowns and easily could have done even more damage had he been used as much as the opposing coach hinted.

Greencastle's defensive pressure was on display in the game's third play, as Cloverdale quarterback Drew Boyette dropped back to throw a lateral pass and the Tiger Cubs broke through the line to knock the ball to the ground and fall on it. Clar scored four plays later, and it was 7-0 just 2:20 into the game.

The Tiger Cubs kept the pressure on during the ensuing possession, forcing Cloverdale into a punt deep in its own territory and trapping helpless Clover punter Trey Henry in the end zone for a safety following a bad snap.

Cloverdale then had to return the ball to Greencastle on a free kick, which the Tiger Cubs ran back to the Clover 43.

Clar had an 18-yard run, and the Tiger Cubs got another first down on a 15-yard penalty, but the Clover defense held tough. Strong-legged Greencastle kicker Ben Webb easily converted a 31-yard field goal for a 12-0 lead with 4:58 left in the opening period.

Cloverdale was forced to punt again, and Costin hit Matthews for a 12-yarder before Clar scored from 21 yards out with 2:36 left in the opening period to make it 19-0.

Another Clover punt gave the Tiger Cubs the ball near midfield, and Costin hit Jackie Scanland for a 19-yard gain before Clar scored from 19 yards out on the next play to increase the lead to 26-0.

Cloverdale's Haiden Davis picked up a pair of first downs on the ground on his team's next drive, but Greencastle forced another punt and took over at its own 23.

Costin moved his team quickly down the field, hitting Tyler Edwards on a 29-yard reception and following that with a 27-yard scoring strike to J.T. Matthews.

Scoring took a timeout for the remainder of the first half and the first eight minutes of the third period.

Greencastle added another score with 4:16 left in the third period on a Costin to Scanland 5-yard TD pass.

The Clovers took over at their own 35 and went on their best drive of the night, advancing all the way to the Greencastle five before being stopped on downs. Boyette hit Tyler Kaeff on a 34-yard pass and Tyce Jackson had a 23-yard run to key the Cloverdale drive.

Clar was long finished for the night, and Greencastle unleashed an impressive group of reserve running backs for the remainder of the game, including senior Derek Ummel, junior Chandler Souders and sophomore Andrew Fajt.

Ummel carried the ball four straight times on Greencastle's last scoring drive, picking up a 37-yard first down and following that with a 10-yard TD.

Whitney Weinschenk then stepped in for Webb and added the extra point.

Costin completed 9 of 17 passes for 162 yards with just one interception, with three of those going to the 6-foot-6 Matthews.

"Kudos to them," he said. "My brother and his staff had the best prepared team, and they stopped us. He did a great job.

"They are bigger, faster and stronger and that's a hard combination to overcome."

Mike Meyer was pleased that his team accomplished the historical standard of improving greatly after its first outing.

"Everything we did, we knew we could do," he said. "We contained their good players, and they weren't able to throw the ball or establish a running game.

"We held them down on the goal line, which was critical, and we got better form week one to week two."

Next game -- Greencastle (2-0) plays next week at West Vigo, while Cloverdale (0-2) hosts Edgewood.