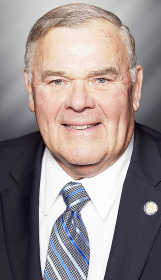 Jim has served the community in numerous positions at county, state and national levels, including president of the Putnam County Fair Board, president of Greencastle Rotary, Putnam County Commissioner, Purdue Dean of Agriculture Advisory Council and as an Indiana State Representative of District 44.

Jim is a Vietnam War veteran who received numerous medals for heroism including the Bronze Star and lost part of an arm during enemy action.

Jim Baird will continue with the torch along the route from the intersection of Washington and Indiana streets to Greencastle High School while traveling in a 1928 Studebaker Fire Truck.

Emma stands out as the youngest torchbearer in Putnam County. She finished eighth in the state cross country finals in fall 2015 and followed this up with a pair of sixth-place finishes in the 1,600 and 3,200 meters in the state track finals this spring, quite an accomplishment for a freshman at Greencastle High School.

Now in her sophomore year, Wilson is already enjoying a strong campaign in the cross country season.

Upon the torch arriving at Greencastle High School, Emma Wilson will be handed the torch and will continue traveling through Avenue D to the People Pathway at 10th Street. 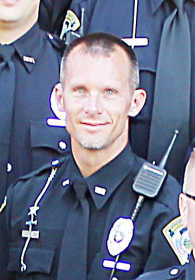 Darrel serves on the Greencastle Police Department and is the town marshal at Fillmore.

He is a community-oriented person, available to help where needed. He helps with school functions, works with People Pathways, helps struggling families, and volunteers for many events.

Last winter, Darrel was on vacation in Arkansas when he helped a local officer apprehend a fleeing criminal. He was later commended by the Little Rock Police Department.

Darrel Bunten will receive the torch and travel along the People Pathway from the east side of Greencastle to Fillmore.