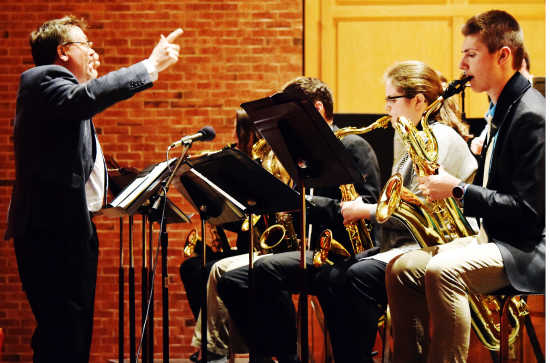 When the DePauw Jazz Ensemble, led by DePauw University professor Steve Snyder, takes the stage for its first fall concert at 7:30 p.m. Oct. 12 in the Green Center’s Kresge Auditorium, debuting along with it will be a new octet.

Wednesday’s program is inspired by a gift from DePauw alumnus Anthony Minstein, a 1974 graduate, who recently provided the group with many classic arrangements for this unique, new eight-piece instrumentation.

“The DePauw Jazz Ensemble has grown musically and artistically every year,” said Snyder, director of jazz studies at DePauw, “prompting the addition of a new group formed from members of the larger band. It’s comprised of the lead players in each of the winds — Lead Trumpet, Lead Trombone, Lead Alto (doubling on bari sax in the octet) and Lead Tenor — along with the full rhythm section.

“The octet has the intimate sound of a smaller group but with the ensemble feel of a big band,” Snyder continued. “The charts that both bands will perform are very modern this time. There isn’t a Basie, Ellington or Thad Jones piece on the program. Instead, we’re taking on music by Maria Schneider, Bob Mintzer, Jerry Dodgion, Mike Tomaro and Gil Evans.”

Minstein, a former saxophonist with the DePauw jazz band, who has played numerous gigs alongside fellow 1974 grad Judson Green and DePauw faculty member Jim Beckel, donated the new charts to the ensemble. The pieces include arrangements for the Dave Pell Octet, in a configuration that has come to be known as the “little big band” format.

“The book is a swinger,” said Minstein, who currently lives in Louisville. “It demands good reading and ensemble playing with every chair soloing on chord substitutions.”

General admission to Wednesday’s jazz concert is $5. Tickets for seniors, youth and all students are free.

For more information and online purchases, visit music.depauw.edu. The venue’s box office is also open beginning one hour prior to every performance.