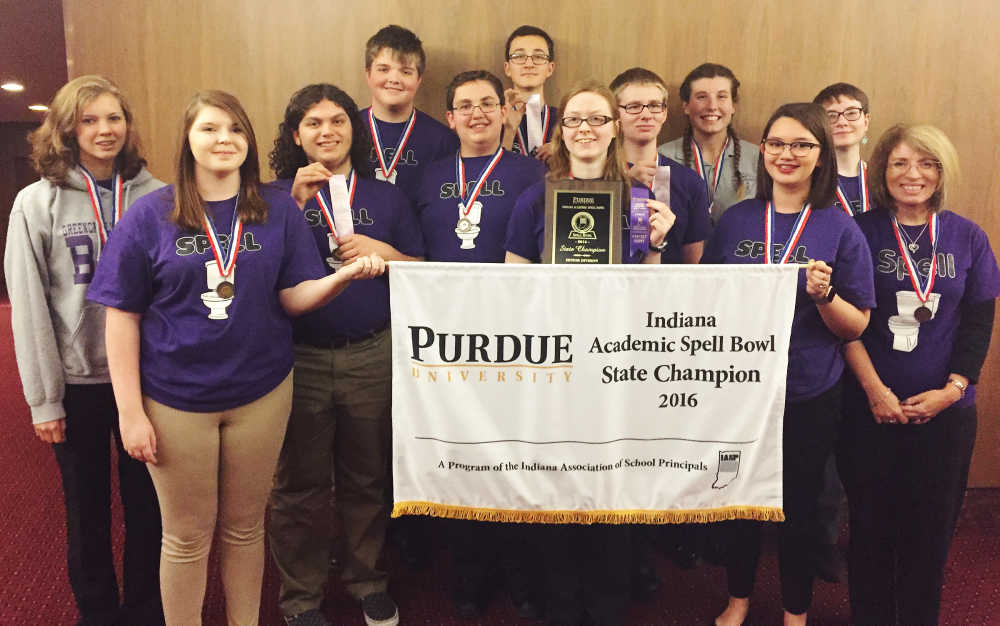 With a legacy of academic state titles to its credit, Greencastle High School added to a growing list with its first Indiana Academic Spell Bowl state championship in competition Saturday at Purdue University.

"We finally did it," coach Nicole Kempf Burkhalter told the Banner Graphic, recounting near-misses that have included two second-place finishes and at least two third places over the years.

Meanwhile in the annual Academic Super Bowl competition, Greencastle is on a streak of at least two state titles over the past four years and two straight years of bringing home three state championships.

Burkhalter reasoned the Spell Bowl can be a little more difficult in getting the right mix of team members.

"We need at least 10 students, preferably more, willing to learn over 3,000 words well," she said. "This year I have 13 kids and I could have used any of them."

The Spell Bowl competition consists of 10 rounds in which different team members come forward one at time to tackle nine words apiece.

Greencastle prevailed with a score of 71 (out of a possible 90), defeating second-place Andrean (Merrillville) by seven words.

Unlike some of the photo finishes that have occurred at the Academic Super Bowl, there was little drama at the end Saturday for GHS.

"At one point we were ahead by 13 words," Burkhalter said, explaining that a team has to finish in the top eight in the state following area competition to advance to the state finals at Purdue.

GHS, which competed alongside North Putnam and Cloverdale at the area level, posted a score of 58 there.

"So we improved that much," Burkhalter praised.

GHS will now turn its academic contest attention to the spring when the English, Science and Interdisciplinary teams defend their state championships in competition that will use the French Revolution as its theme.