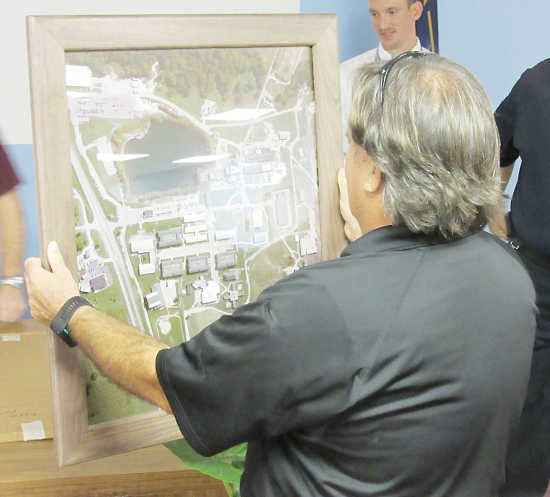 Having shared some memories of his time as superintendent of Putnamville Correctional Facility (below, right) retiring Department of Correction Commissioner Bruce Lemmon receives a framed aerial view of the Putnamville facility as a memento from the PCF staff during a Monday luncheon.
Courtesy photos

PUTNAMVILLE — Set to retire today as commissioner of the Indiana Department of Correction, former Putnamville Correctional Facility Superintendent Bruce Lemmon was back at his old stomping grounds

Current Superintendent Brian Smith and the rest of the PCF staff hosted a pitch-in lunch as a farewell to the retiring commissioner.

Besides visiting with former colleagues, Lemmon received a framed aerial view of the prison and surronding area as a reminder of one of the several facilities he oversaw during his 40-year career with DOC.

“There are so many wonderful people I worked with at Putnamville and I will never forget this place,” Lemmon said.

Lemmon served as superintendent at Putnamville from 2008 until former Gov. Mitch Daniels Mitch Daniels appointed him DOC commissioner in 2011.

The Terre Haute native previously served in the United States Army and is a graduate of Indiana State University.