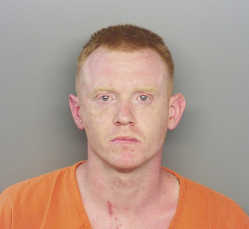 A Fillmore man is in custody after a Tuesday afternoon pursuit on the south side.

Darrel Skinner was booked in the Putnam County Jail on a number of charges, although another suspect remains at large.

At 2:25 p.m., Greencastle Police Officer Kyle Lee was on patrol near the intersection of Veterans Memorial Highway and Bloomington Street when he recognized Skinner, who had an active warrant for his arrest.

While confirming the warrant on Skinner, Lee began to follow the Ford pickup in which Skinner was a passenger.

Once the warrant was confirmed, the truck was turning onto Crown Street from Sycamore Street and parking on the wrong side of the road.

Upon spotting Lee approaching, Skinner and the driver fled on foot.

While searching the area, DePauw Det. Matt Demmings spotted Skinner, at which time the suspect fled from Demmings.

Demmings chased Skinner on foot through several yards until the suspect gave up in the backyard of a residence near the intersection of Illinois and Howard streets.

Skinner was then taken into custody by Demmings and Lee without incident. He was found to be in possession of a bag containing a white crystal-like substance believed to be methamphetamine.

An inventory of the vehicle conducted before it was impounded revealed several articles of drug paraphernalia, approximately 19.5 grams of a white crystal-like substance believed to methamphetamine and a large amount of U.S. currency.

The truck also had two motorcycles in the bed, one of which was confirmed as stolen.

Skinner was transported and booked into the Putnam County Jail on charges of felony possession of methamphetamine, resisting law enforcement, possession of a syringe and theft (receiving stolen property).

The driver of the vehicle remained at large as of 9 p.m. Tuesday, however police have a lead on the identification of suspect due to surveillance footage retrieved from a residence in the area.