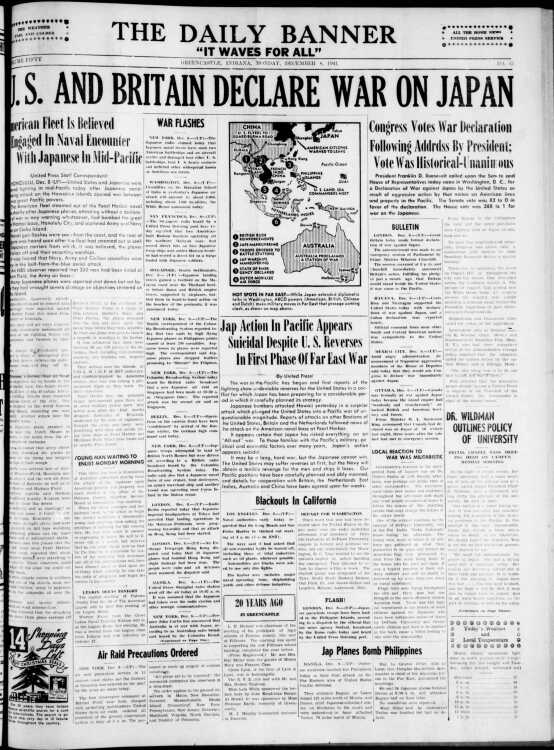 Dec. 7, 1941 -- a date that will live in infamy as President Franklin Delano Roosevelt so eloquently stated -- has hit the 75-year anniversary mark today.

And as the survivors of that day dwindle by the year, Pearl Harbor remains the defining moment for generations of older Americans. Just as the Kennedy Assassination was to the Baby Boomers and the 9/11 attack has been to the current generation.

Americans of that era will forever remember where they were and what they were doing when news of the Japanese attack on Pearl Harbor reached them.

Greencastle octogenarian Jinsie Bingham is among them. Although just a child when the attack occurred, she has vivid memories of how it affected her family and her community.

“My parents opened the Monon Grill in 1940 and my Mom managed it ‘til 1945,” she recalled for the Banner Graphic. “Many young men worked there before being drafted.

“One of my 1940s memories is of her sitting at her desk with a tiny little desk light, writing to everyone who ever worked there and some of the guys who worked for my Dad at Scott’s Franklin Street Garage.

“Some place in this big old house are a couple of boxes of letters from overseas,” Bingham continued. “The letters were written and then copied and shrunk in size on those special wartime sheets which folded a certain way to make the envelope seal. She never knew where any of the guys were stationed unless they were in the U.S. and letters were censored to prevent an leaked secrets.”

Among the Navy men at Pearl Harbor that day was James F. Cox, a Parke County native who later lived in Greencastle and Cloverdale.

Headlines of that day screamed of surprise attacks, devastation and the horrific outcome. Meanwhile, a local story in the Daily Banner of Dec. 8, 1941 was topped with the headline “Local reaction to war was militaristic.”

“Greencastle’s reaction to the unexpected flash of Japan’s war on the United States at 1:05 Sunday afternoon (local time), was perhaps not unlike that of other communities,” began a story that carried no byline.

“The announcement came over radios and continued throughout the afternoon and night and most people remained at home to follow the course of the startling events that may change the future of the entire world.

“One of the wildest reactions on the campus of DePauw University was at the Phi Delta Theta fraternity house during the afternoon. The young men, none of whom is of military age, gathered up what they purported to be guns and behind an American flag, they proceeded to drill from the main living room of the house, into the yard and back. It was a typical reaction of their military instinct and will no doubt be followed up by more than one army or naval enlistment,” the story continued.

“Flags were soon flying throughout the city and there was but one thought in the minds of every citizen -- America first. There was the typical resentment in the hearts of most citizens against the Japanese, who have been befriended scores of times by DePauw University and Greencastle citizens and then to be stabbed in the back, causing a bitter feeling to run over the community.”

In another Daily Banner article, DePauw President Clyde Wildman read a statement setting forth the attitude of the university during a specially called chapel program.

“Our nation is a peace-loving nation,” Wildman said. “It was earnestly and sincerely seeking for a solution of the troubled problems of the Pacific. In this attempt, it has been unsuccessful.

“Japan has struck a blow which leaves no doubt of her intentions,” he continued. “We deeply regret the situation. War is not the method which our government decided to use.

“We must not underestimate the power of Japan,” the DPU president stressed. “She has a strong navy and a fanatical army. Her leaders are definitely militaristic in their faith and practice.

“It is doubtful the citizens of Japan want this war,” Wildman continued. “The war may be short, and we hope it will be. But it may also be longer than we expect. And in all wars there are heavy sacrifices of civilians as well as the army.”

Greencastle resident and U.S. Army Chaplain Jim Staggers, who serves as deputy state chaplain for the Joint Forces Headquarters-Indiana, will put a current perspective on Pearl Harbor during a speech later today, making a connection between Pearl Harbor’s generation and those of 9/11 -- “one that is dying off and the other emerging.”

“The more than 2,400 men, women and children who died the day of the attack, would be joined by thousands of others in the seven and a half decades since,” Staggers told the Banner Graphic. “As those able to provide firsthand accounts leave the ranks of the living, it is up to us to keep their legacies alive.”

Despite the advantage of surprise exploited by the Japanese planes and submarines, Staggers said the “feisty Americans” at Pearl Harbor still destroyed 29 enemy aircraft, damaged 29 others and sunk or beached five mini-subs.

Six American battleships that were sunk or damaged during the attack, were restored, refloated and returned to service. Survivors who were physically able to continue their service, fought on for the duration of the war or until wounded or killed.

Fifteen Medals of Honor were awarded as a result of the Pearl Harbor attack -- 51 Navy Crosses and 53 Silver Stars.

“Thousands of other acts of heroism were not recognized with medals because documenting the acts was not the priority,” Staggers noted. “Saving others and fighting another day in order to defeat those who brought the war became job one.”

“Many of the 9/11 heroes were veterans,” Staggers continued. “Nearly all were taught about the Pearl Harbor attack in history class. There was something very American about their response.

“Just as the Pearl Harbor heroes were likely inspired by the doughboys of World War I, the valor that we continue to witness among today’s military is at least partially the result of young men and women who want to live up to the legacies of those who preceded them.”

A date that will live in infamy? For certain. Seventy-five years later that remains oh so true ... with no end in sight.