He married Florence V. Cornelius on June 11, 1947 in Brazil, Ind. He met her while serving his country in the United States Army, while traveling through Pennsylvania. 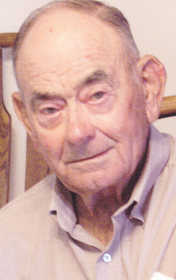 During his service to his country in World War II LeRoy served in the Army 4th Battalion in Germany. He entered the Army on Dec. 27, 1943 and was honorably discharged April 23, 1946 with the rank of sergeant.

He performed duties of lineman, telephone and telegraph as well as supervising 11 men in the installation of permanent telephone lines and cables, set poles in ground, attach wires and installed switchboards and telephones. He served in the Rhineland Campaign in Central Europe. He received the EAME Theater Ribbon with two Bronze Stars, the Good Conduct Medal and the World War II Victory Medal.

LeRoy was preceded in death by loving wife of over 67 years, Florence, his parents and six siblings.

He worked at Handy's Dairy in their early years of marriage and farmed for many years as manager of the Marsh Farm.

He then became the operator of the Standard Elevator Farm in Reelsville, he was the largest "Feeder Pig" producer in Putnam County at one time and had appeared on one of the agriculture segments on Channel 8. He received visits from Purdue University, and served the community as a volunteer fireman at the Reelsville Fire Department.

After leaving the farm he worked at Central National Bank as the maintenance supervisor. One of his biggest pleasures was to put up Christmas lights around the outside of the bank where he put on a truly beautiful display.

LeRoy loved the outdoors. He hunted and fished and in his later years planted a large garden, propagated mums and had them all over his yard. He and Florence loved sharing produce with family and neighbors. He put up martin houses every spring and had over 300 birds at one time. His family and friends always enjoyed watching the martin houses go up, he had a reputation as the Martin Man and helped others to learn about them.

He loved to paint landscapes and sold his paintings for many years at Berry Street and had them displayed in the Putnam County Museum for a short time.

Funeral services will be conducted at 1 p.m. Saturday, Dec. 10 at Bittles and Hurt Funeral Home, Greencastle, with calling there from 11 a.m. until the time of the funeral. Interment with military honors will follow in Fillmore Cemetery. Condolences and expressions of sympathy may be shared with the family by visiting www.BittlesandHurt.com.