The prestigious scholarship will provide full tuition and fees for four years of attendance at any Indiana college or university. In addition, winners receive a $900 annual stipend for required books and equipment.

David is the son of Andrea Jackson and John Flannelly. He intends to study medicine at the University of Notre Dame. 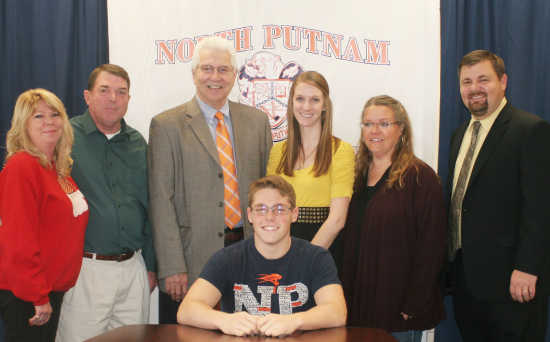 "I am deeply honored and grateful to be recognized with this award. I've always believed that if I focused on school, I would be able to have the funds to go to college and the freedom to choose what I wanted to study," Flannelly said. "It is now a reality."

Selection criteria for the Lilly Endowment Community Scholarship (LECS) is based on scholastic abilities and intellectual pursuits, capacity to lead and motivate fellow students, social commitment and extracurricular involvement, and the ability to articulate career plans that demonstrate motivation and initiative.

While informing Flannelly that he was the 2017 Putnam County Lilly Endowment Community Scholar, Debbi Christy, who chairs the LECS Selection Committee, commented, "The Lilly Committee was first introduced to you by reviewing your scholarship application packet. Your commitment to excel was evident. We invited you to the dinner interview and then the final interview and learned more in depth about your heart and passion for others and how in everything you are involved with you choose to pursue excellence. We were inspired by you. We have confidence you will make a positive impact on the world and will do so with determination and enthusiasm."

In a letter of recommendation a teacher wrote of Flannelly, "I have witnessed (David's) leadership, work ethic, morals and character tested time and again. David has risen to each challenge and demonstrated himself as a leader of his generation."

During his North Putnam High School (NPHS) career, Flannelly has been involved in a variety of activities. As a musician, he is a member of the NPHS Concert Band, Jazz Band and Pit Orchestra where he is the first chair alto sax. He is also a member of the Key Club, a community-based service club. Outside of school, David volunteers with Hope's Way and Gleaner's Food Bank.

As an athlete, David has participated in football, wrestling and track all four years, being selected captain as a junior in wrestling and as a senior in both wrestling and football. By the end of the school year, he will have earned nine varsity letters and received the Student Athlete Award in each sport.

On Sunday, Flannelly will be recognized by the Indianapolis Colts, the Indiana High School Athletic Association and the Indiana Football Coaches Association as one of 26 outstanding student-athletes with the 2016 Indiana Academic All-Stars Award.

Academically, Flannelly has excelled as well. He is on schedule to graduate as a valedictorian with an Academic Honors Diploma. He is the president of the North Putnam National Honor Society. He also represented his school at Hoosier Boys' State, which provides a hands-on learning experience about state government.

The LECS is selected following a review process by the Lilly Endowment Community Scholarship Selection Committee from the Putnam County Community Foundation. The Selection Committee was composed of eight voting members, with two members residing within each of the geographic areas served by the four county school corporations. The Lilly Endowment Community Scholarship is highly competitive.

There were 20 qualified applicants for the one scholarship award. The selection process included a blind review for the first three phases, followed by a dinner in which the Selection Committee met with six semifinalists. The selection process concluded with four finalists having individual interviews with the committee.

Following personal interviews, the committee submitted their nominee and alternates to Independent Colleges of Indiana Inc. (ICI) for final approval. ICI is a nonprofit corporation that represents 31 regionally accredited degree granting, nonprofit, private colleges and universities in the state which administers the scholarship program.