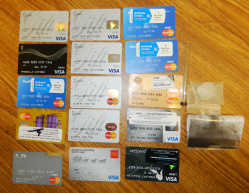 At 12:15 p.m., an Indiana State Police Commercial Vehicle Enforcement trooper stopped a 2011 purple Freightliner tractor for a routine commercial vehicle inspection on eastbound I-70 near the 43-mile marker, two miles east of the Cloverdale exit.

During the inspection and conversations with the driver, Tiran Bachkhyan, 56, of Pasadena, Calif., the trooper noticed possible indicators of criminal activity.

The semi was transporting medical supplies from California to Pennsylvania.