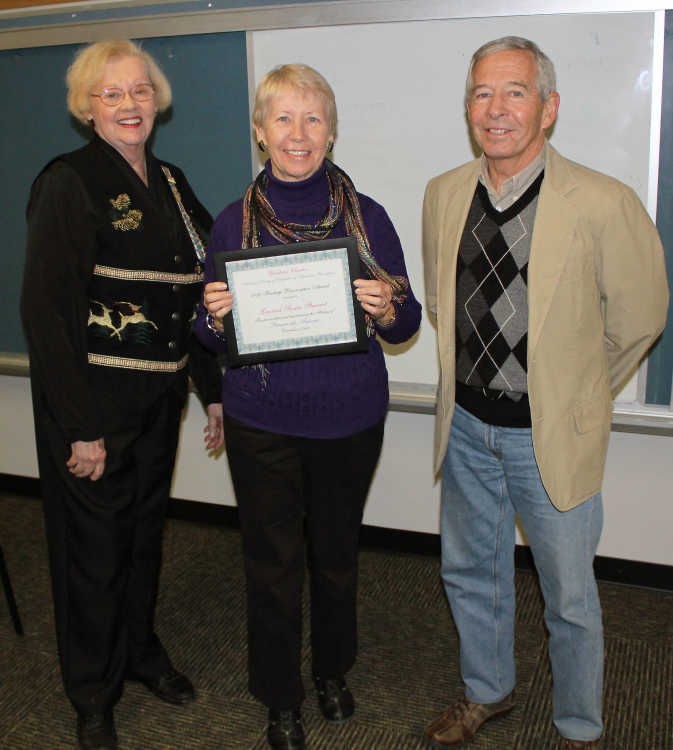 Banner Graphic/ERIC BERNSEE The 2016 Historic Preservation Award, presented by Washburn Chapter, Daughters of the American Revolution, is displayed by Susan and Lee Stewart after it was awarded recently by local DAR member Jinsie Bingham (left).

Those longtime stewards of Putnamville history and lore, Susan and Lee Stewart, have been named winners of the 2016 Historic Preservation Award, presented by Washburn Chapter, Daughters of the American Revolution.

“For the past several years Washburn Chapter has recognized folks in Putnam County who are leaders in local historic preservation,” longtime DAR member Jinsie Bingham said of the award.

“We have honored authors, tombstone restorers, memorabilia collectors and old home restorers. Today we honor folks who are saving a town -- Putnamville. Susan and Lee Stewart are recognized for their devotion to a community.”

The history of the western Putnam County community along U.S. 40 won’t be lost, Bingham noted, thanks to the efforts of the Stewarts, who have built on the work of Putnamville area ladies who started collecting history years ago.

Included in that Putnamville narrative, Bingham said, “is the classic traveling salesman and innkeeper’s daughter story.”

Seems that Dr. Daniel Layman, traveling along the National Road (U.S. 40) en route to Terre Haute to set up a medical practice in 1828 met and fell in love with Mary, the innkeeper’s daughter, and the rest is history.

Layman stayed in Putnamville, creating a successful medical practice which he turned over to Dr. Amos Burns, who wrote several more pages of Putnamville history while in the community from 1884-1925.

That history lesson was necessary to understand why Lee Stewart’s contributions were so important after he learned a few years back that Dr. Horn’s old office was about to be demolished.

Stewart leapt into action, enlisting the support of local businesses like the Hartman Sawmill and Cook Lumber Co., and secured labor from the Putnamville Correctional Facility.

They actually “very gingerly” loaded the frame doctor’s office on a low boy and hauled it to its present location in front of the Putnamville Methodist Church at State Road 243 and U.S. 40.

Dr. Horn’s office is now the local museum and Susan Stewart is its curator. She has collected Putnamville stories, memorabilia and photos.

“Putnamville is an old community,” Bingham noted, “and was an important stagecoach stop on the National Road. The stage didn’t come to Greencastle. You would get off at Putnamville and hopefully find some enterprising farmer to load you up on his wagon and take you to Greencastle -- or you walked.”

Bingham said the Stewarts “will see to it we know the Putnamville story.”

She reminded the audience that when a previous Greencastle city park director suggested tearing down the rock wall that stands along the interior roadway near the DAR log cabin, Lee Stewart was one of the first to fight that notion.

“He got a crew together and fixed it instead,” Bingham said. “That’s the kind of people we want to honor.”

Each year the DAR honors someone locally who has both made and preserved history. Previously recognized by the Washburn Chapter for their historic preservation efforts have been:

-- John Baughman, a retired DePauw professor whose many essays about Putnam County history have been published in book form.

-- Jim Cooper, another DPU retiree who is recognized as a premier historic bridge expert for the state of Indiana.

-- Malcolm Romine, a Putnam County native who authored a number of books about early life in the county.

-- John and Carolyn Carson, who amassed a mountain of Greencastle High School memorabilia and helped start the GHS Alumni Association.

-- Larry Tippin, who has helped restore pioneer cemeteries around the county and whose handiwork can be seen in the old city cemetery next to Blackstock Stadium.

-- Tim and Kim Shinn, who not only restored their former East Washington Street home across from GHS but also renovated the old Dr. Zaring home and its carriage house at Poplar and Vine streets.

-- The collaborative effort between the City of Greencastle and DePauw University on the Stellar Community project was honored with the 2015 Historic Preservation Award.