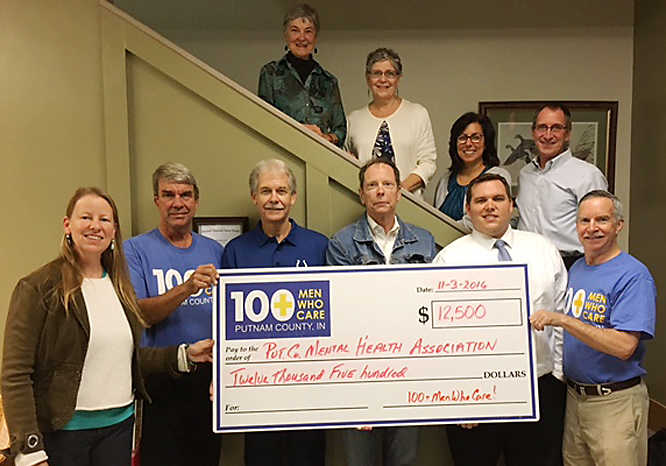 At the November meeting of 100 Men Who Care of Putnam County, Bill Nunn, a member of 100 Men and director of the Putnam County Mental Health Association (PCMHA), shared how the organization recently experienced a major unexpected short fall in funding.

This emergency re-energized and committed the organization to tell the stories of success and struggles revealing how volunteers have become committed to continuing to provide resources and serve the Putnam County communities and schools.

Nunn’s telling of the methods the organization employed to assist parents and children to develop healthy relationships. In addition, he described how the educational and community programs presented in the local schools offset potentially negative impacts. His stories moved the men in attendance to award the PCMHA $12,500 at the final meeting of 2016.

Opening the final meeting of 2016, Scott Davis, the organizer of the Putnam County Chapter of 100 Men Who Care, summarized his experiences, “I can’t thank the generous men of Putnam County enough times for the impact our organization has had for eight non-profit organizations the past two years.”

In his remarks he noted how from the first planning meeting in January 2014 with 11 other like-minded men, to now, the group has stepped forward in truly wonderful ways to contribute more than $96,000 to charities, and created a $45,000 Community Grants Endowment at the Putnam County Community Foundation.

In closing, Todd Lewis, a member of the board, also shared his experiences as a member of 100 Men and identified why the organization is looking ahead to 2017.

“We know from the nominating process that we have more charities in need of resources for programs and services,” Lewis said. “At one of our meetings this year we had 13 charities nominated, but could only choose one.”

The 100 Men organization is a giving circle of 125 men from all walks of life that donate together to combine the power of numbers to significantly impact 501c3 charities in Putnam County.

The organization is currently renewing and registering men for 2017. By prepaying before the end of 2016 men can take advantage of year-end tax deductions.

Contact Todd at toddl@fnb-bank.com or sldavis705@gmail.com to renew or register.