CES kindergarten class gets tickets punched for ‘The Polar Express’ 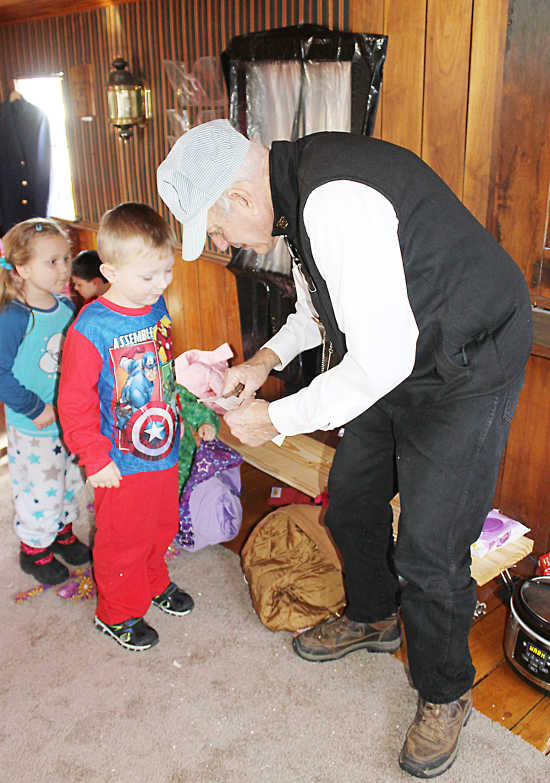 Besides viewing holiday favorite “The Polar Express” in a real train caboose, Katina Wetter’s kindergartners at Cloverdale Elementary got a lesson in trains from Larry Linneman (opposite and above), who also punched real train tickets for all the kids, including Kolten Monnett.
Banner Graphic/JARED JERNAGAN
Order this photo

CLOVERDALE — Even generations removed from their heyday at the center of American commerce and culture, there remains something about trains that still captures the imagination of children.

With a remnant of this bygone era sitting just blocks from Cloverdale Elementary School, kindergarten teacher Katina Wetter decided to use it to her class’s advantage.

The last day of school before winter break is often not a time of great learning. Instead, teachers simply try to corral the holiday fever and spend the day on parties and Christmas movies.

While not depriving her students of the fun of the last day of school, Wetter also infused some education into the merriment on Tuesday. 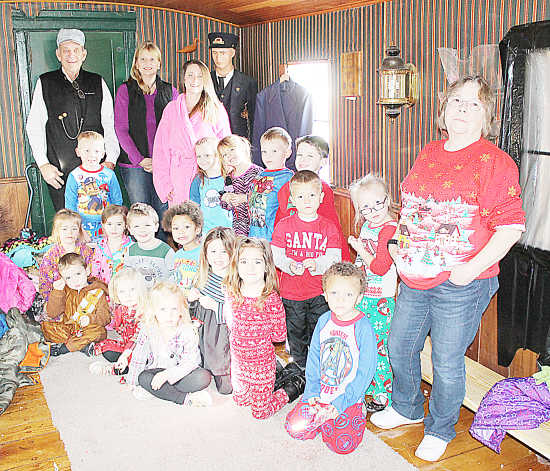 Awaiting the children inside was a screening of “The Polar Express,” a holiday-themed lunch and even a railroad lesson from railroad enthusiast and conductor for the day Larry Linneman.

Far from a novice in a striped, denim cap, Linneman has railroad lines in his bloodlines. His father Raymond worked as a conductor on the Pennsylvania Railroad for more than 40 years and both of his grandfathers were also railroad men.

“I grew up on these trains,” Linneman said. “I was riding cabooses like this when I was 10 years old.”

A retired well driller, Linneman did not get into the family business, but he remained an avid collector of train memorabilia, including his father’s uniform — which a mannequin in the caboose wore on Tuesday — as well as Raymond’s old ticket book and hole punch.

Not your run-of-the-mill hole punch, the punch Larry held in his hand was unique to his father, cutting an individual insignia to each ticket.

“A passenger could travel to New York and someone could look at that ticket and say, ‘That was punched by Mr. Linneman back in Indianapolis,’” his son said with pride.

There was even a lesson in the tickets themselves. Each child got one when he or she got on the train and had to have it punched again before departing after lunch.

“You have to have your ticket,” Linneman told them.

Linneman also still has his father’s pocket watch, although that was not on display for the kids on Tuesday. Each conductor’s timepiece had to be periodically taken to the company to be checked and synchronized so the railroad could continue to run like clockwork, so to speak.

“They had to be on time,” Linneman said. “I’ve rode on Amtrak and they are not on time.”

How the caboose even came to be in Cloverdale was quite an undertaking for Huntzinger.

It sat at his other business, Spencer Hardware and Lumber, since 1992. In the fall of 2015, it was moved to Cloverdale on a trailer by Ralph Schwartz, with Huntzinger hauling the wheels in his truck.

The 18-mile trip up and down the hills of U.S. 231 took about two hours under the weight of the load.

The caboose now in place for more than a year, Linneman and Huntzinger continue to work on it. The floor was refinished recently and the car is outfitted with air conditioning and heat — which was important with Tuesday’s high temperature in the 30s.

For her part, Wetter is grateful to Huntzinger for the experience he is providing for her students.

“This has all been made possible due the generosity of Mr. Huntzinger,” Wetter said. “He not only donated the use of his train car, but also supplied the funds for lunch.”

Huntzinger returned the praise to Wetter.

The experience concluded not only with lunch, but with a gift from Huntzinger’s wife Caprice and their granddaughters Ruby Capri and Emery Bland, who were able to watch the movie with the class.

Each child in the class was presented with a sleigh bell, just like the main character of “The Polar Express” receives from Santa Claus as “the first gift of Christmas.”

With lunch concluded, the children headed back to school, lunch in their bellies, sleigh bells in their hands and memories in their minds and hearts.

“All those kids, I’m sure, will remember it for years,” when they pass the caboose, Huntzinger said. “They’ll tell their parents, I’ve been in there.”