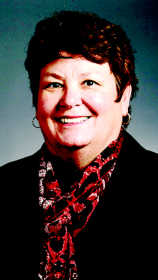 INDIANAPOLIS -- When Indiana Governor-elect Eric Holcomb pondered his appointment of an executive director for the Hoosier Lottery, he didn’t take a gamble.

He went with an odds-on favorite, reappointing Greencastle native Sarah Monnett Taylor as executive director of the Hoosier Lottery.

Holcomb noted that under Taylor’s leadership the Hoosier Lottery has achieved record sales and record contributions to the State of Indiana. The governor-elect expressed confidence in her management of the agency and its innovative and successful service agreement with IGT Indiana.

The daughter of longtime Greencastle residents Mary Jane Monnett and Keith Monnett, Taylor was initially appointed to the Hoosier Lottery position by Gov. Mike Pence in 2013.

Prior to that appointment, she had served in the cabinet of Indianapolis Mayor Greg Ballard as director of constituent services. Previously she was twice elected Marion County clerk and worked with government technology consulting firms.

An active participant in the lottery industry organizations, Taylor was recently elected to chair the Finance and Audit Committee for the Multi-State Lottery Association (MUSL), comprised of the 36 state lotteries who participate in Powerball.

She was also elected to the Executive Committee of the North American Association of State and Provincial Lotteries (NASPL) as the regional representative for a large portion of the Midwest, including Ontario, Canada.

A graduate of Indiana University, Taylor and her husband David and their sons live in Indianapolis.

The Hoosier Lottery finished the fiscal year in August by sending $281 million to state tax coffers after a record year in sales.

“All Hoosiers will benefit from this very successful year for the Hoosier Lottery,” Taylor said. “We will provide $60 million to the pension funds for Indiana’s teachers, and local police officers and firefighters, and our contribution to the Build Indiana Fund will continue to support reduced auto excise taxes.”

Taylor recently reported that unaudited results for the fiscal year showed the lottery with a total revenue of $1.2 billion. Lottery winners received more than $772 million in prize payments, and more than 4,500 retail partners earned $82 million in commissions.