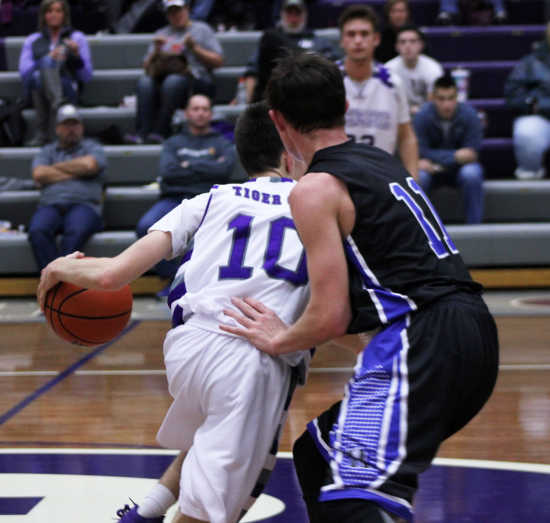 Colin York gets past a hand-check and goes to the hoop for two of his 28 points on Saturday night.
Banner Graphic/Joey Bennett

Not having scored more than 56 points in any of seven previous games this season, Greencastle unleashed an offensive explosion on Saturday night and picked up its first win of the year — an 84-51 trouncing of visiting Rockville.

The Tiger Cubs didn’t take long to establish themselves, as junior scoring leader Colin York scored five points in the first 43 seconds of the game as Greencastle led 26-6 at the first stop — more than half of its average of 45 points per game.

First-year head coach Bryce Rector of the Tiger Cubs predictably deflected any personal satisfaction from his inaugural victory on the bench toward his program.

“This group was hungry for a win,” Rector said. “We felt like we have competed in games, but we had yet to compete for four full quarters. We have preached having urgency and intensity from the start of the game, and we did that in this game.”

Rockville’s Ethan Spence got four points to cut Rockville’s deficit to 5-4, but the Tiger Cubs got baskets from improving sophomore center Gavin Bollman, senior guard Devin Clar and York to go up 11-4. After a Rockville hoop, the Tiger Cubs ended the period on a 14-0 run over the last 3:19 as Alex Costin had a pair of treys off the bench, York had two more hoops and Bollman and Jack Hutcheson each contributed a basket.

Greencastle’s 3-point barrage continued in the second period, as York hit both of his treys, Nick Costin hit 2 of 3 and Alex Costin added another as the Tiger Cubs improved their advantage to 46-20 at the half.

“It’s taken a while for everybody to contribute,” Rector said. “Colin is still learning a role right now, and his role right now is so different than last year. You can see him progressing, and it’s a fun progression to watch.

“He took over for the majority of this game,” he added. “He’s the marked man every night, and he handles pressure really well.”

J.T. Matthews had the first six points of the second half for Greencastle, and Nick Costin soon started a 6-0 run with a pair of free throws. Hutcheson added a basket and York contributed a steal plus a hoop for a 58-26 lead with 4:05 left in the third quarter. 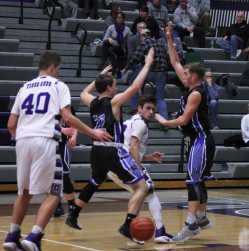 Unsure of how to handle such a large lead, since it hadn’t happened all season, the Tiger Cubs let up for a few minutes and Rockville reeled off nine points in a row to cut the gap to 58-35. The outcome was never in jeopardy, however, as the Tiger Cubs took that 23-point advantage into the final quarter.

York hit 10 of 17 field goals on the night, including 4 of 9 from long range, and also hit 4 of 5 free throws. Nick Costin added 12 points, while Alex Costin had nine and Matthews contributed eight.

Bollman also led all rebounders with 16.

“Gavin Bollman was excellent on the boards,” Rector said. “Both Costins chipped in, as well as J.T.

“I thought Devin Clar had a great game,” he added. “He is getting better. He’s a good athlete, and competes his butt off. Good things happen to those kinds of players.”

Rector hopes the win is the first step toward a revitalization of the culture in the program.

“It’s a step in the right direction,” he said. “It’s been a rough start, and we knew it would be. I can’t say enough about how our kids have bought into what our kids are doing. It’s not easy when you’re not winning to want to come to practice. For me personally, this win is more about where we keep taking steps toward when we compete for championships.”

Besides York and Hutcheson, the remainder of Rector’s regular rotation were key members of the Tiger Cub football team in the fall.

While Rector was thrilled to see his new school achieve such great success as the 9-2 Tiger Cubs did, he was not surprised that it has taken the athletes involved with both teams to be slow out of the gates.

“In the places I’ve coached where football has been a big part of the athletic program, like it is here, those teams always don’t find their stride until after Christmas break,” he said. “That’s a credit to those guys for sticking to it, and they’ve done a great job of coming along.”

Rector’s team has Friday-Saturday “double weekends” every week in January, plus a midweek makeup game with Cloverdale on Jan. 24,

“I told our kids this is the fun part of the season, where you constantly get to prepare for different teams,” he said. “I’m just proud of how we played and we’re going to continue to build on that.”