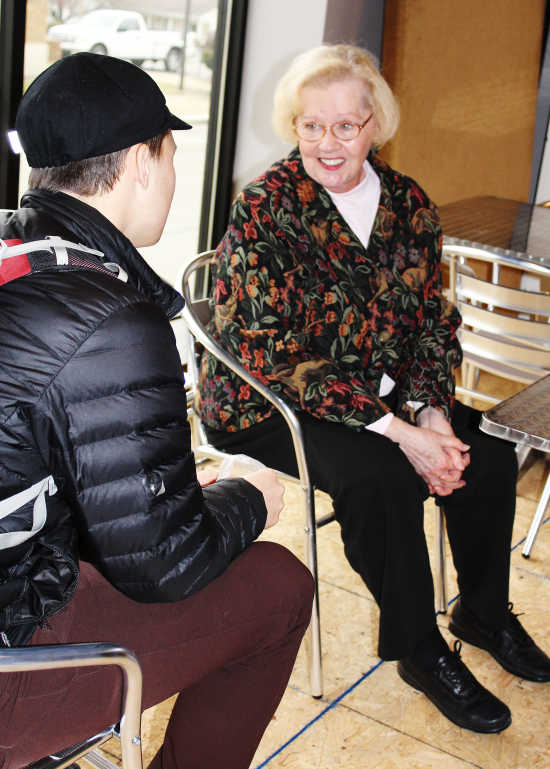 During Winter Term this month, DePauw University students have gone galloping off to the Galapagos Islands, cruised to Cuba, explored Ecuador and made a jaunt to Japan.

Meanwhile, two dozen of them have spent January expending shoe leather in seeking out the soul of Greencastle in a class titled “Outside: A Course in Environmental Awareness,” led by English professor and poet Joe Heithaus.

“I thought it would be cool to have a class where every day is a field trip,” he told the Banner Graphic.

So he’s led his class on hikes beyond campus and all around town.

Heithaus has sent them on a scavenger hunt, walking east as far as McKim Observatory, west as far as the city sewage plant, south to Main Street and Broadway “to make sense of why it’s there,” and north to the old hospital, where they had to resort to word of mouth to find it since it’s apparently not on Google Earth on their phones, the professor said.

They’ve walked to the quarry on a snowy day and checked out ancient fossils, learning from Professor Scott Wilkerson how the glaciers came this way via Lake Erie and how the preponderance of Indiana limestone quarries essentially starts here and heads south because of those glaciers.

They’ve hoofed it over to Buzzi Unicem (Lone Star) where Bob West showed them the remains of an old kiln that reportedly dates back to the 1850s and walked to the Putnam County Museum and met with local historian Larry Tippin.

The course, Heithaus said, is an opportunity for participants to better understand themselves — not just as DePauw students, but also as citizens of Greencastle and the natural world.

And Monday at the Wasser Brewing Co. at Franklin and Vine streets, they got a chance to hear Jinsie Bingham, a fountain of local knowledge, talk about DePauw and IBM, Eli Lilly and John Dillinger and even her father, Roscoe Scott, as she meandered through Greencastle history for an attentive audience at the brewery.

“I like being in the building where I grew up,” Bingham said. “Chris (Wasser owner Chris Weeks) has done amazing things with this place.”

Students learned that the location was briefly a gas station in the 19-teens, Weeks said, had been the site of greenhouses for Eitel’s Florists and became a repair garage when Scott bought it in 1935. He later turned it into a Packard car dealership after World War II.

“Students, you are sitting on hallowed ground,” Bingham said.

So in going from greenhouse to gas station to car dealership and later a long life as the NAPA auto parts store, “this building itself has been repurposed in a number of ways,” Heithaus said.

Bingham, who was born in December 1935, recalled how the family lived east of town in what has been known as the Carkeek house just west of Headley Hardware on Indianapolis Road.

“Headley’s built their hardware store where my grandfather had a barn,” she said, explaining that what seems to be in the heart of Greencastle today was actually a working farm at the time.

“Greencastle has changed a lot in my lifetime,” she said, recalling that coming out of the Great Depression, Greencastle considered itself “transportation wealthy and connected to everything in the world” what with three railroads and the Interurban streetcar running through town on its route between Indianapolis and Terre Haute.

“This past December I marked 75 years at 104 Bloomington Street,” the 81-year-old Bingham said of her two-story home which backs up to the Delta Tau Delta fraternity house. Her family moved there in 1941, Bingham said, and she still has “original dust.”

Her parents were part of two historic arrivals in Greencastle, she said.

They owned the original Monon Grill (later called The Monon) from the day it arrived on a train from Kansas City as Greencastle’s first pre-fab building in the 1940s.

Her father also owned the building at Franklin and Indiana that now houses DePauw’s M2, Music on the Square, but was first the A&P store and later Goodwill.

As the A&P, Bingham recalled, it was the first Greencastle store to have shopping carts and checkout lanes.

People also fondly remember the aroma of ground coffee, she said, as shoppers would pick up a bags of beans and have it ground before leaving the store.

Meanwhile, Bingham called Eli Lilly “the most famous resident of Greencastle” but said the location of his first drugstore “is not on the corner where we have the plaque” at 2 W. Washington St., but instead was originally in a space under Old National Bank, kitty-corner from the designated historic site.

Lilly also married a Greencastle girl, Emily Lemen, who died of malaria while he was off serving in the Civil War, she told the Winter Term group.

“One of the other things that put Greencastle on the map in the 1930s,” Bingham continued, “was a visit from John Dillinger.”

On Oct. 23, 1933, the notorious Dillinger robbed the old Central National Bank at Jackson and Washington streets, reportedly making the largest haul of his 11-heist bank-robbery career -- $75,000 in cash and negotiable bonds.

He left Greencastle, Bingham noted, via “the only road out of town that the trains didn’t cross.”

Meanwhile, Greencastle and DePauw “have been good friends, solid friends” throughout the years, she said, calling DePauw the city’s “best friend” since the school was established June 5, 1837.

“It seems over the years when one was down, the other was up,” the local history buff reasoned.

She also recalled her days as a DePauw coed in the 1950s, much to the students’ enjoyment.

“Living in a dorm with a 9 o’clock curfew was torture,” she said of moving into Rector Hall, which Bingham estimated was about 1,200 feet from her home but she wanted the “true college experience.”

Meanwhile, “in the classroom, we were expected to listen, not participate,” she added. “The atmosphere is so much better now.”

Bingham summed up her life and her association with the city and the university quite simply before the students bid Wasser Brewery adieu.

“We feel pretty good about living in Greencastle,” Bingham said.