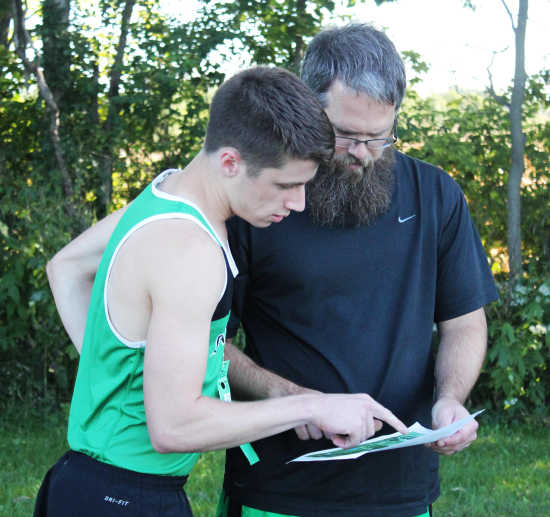 Cloverdale track and field head coach Andy Tyler goes over some course instructions with Chad Stevens during cross country season. Tyler is one of eight nominees for the Indiana Association of Track and Cross Country “Coach of the Year.”
Contributed photo

Cloverdale High School track and cross country coach Andy Tyler is one of eight nominees for the 2016 Indiana Boys Track and Field Coach of the Year award given by the Indiana Association of Track and Cross Country Coaches.

All nominees will be recognized at the IATCCC Annual Meeting on Feb. 3, and the winner will be announced at that time.

Blundell finished the best between the pair, placing 13th in the 800-meter run after entering the event seeded last among the regional qualifiers.

The annual meeting is at the Sheraton Hotel at Keystone at the Crossing in Indianapolis as part of the IATCCC Track Clinic.

Other track and field nominees in Class AA (schools with enrollments of between 405 and 813 students) are Lisa Gausman of Batesville, Brent Kunkel of Bluffton, Karl Knerr of Brebeuf Jesuit, Steve Foulds of Hanover Central, Bill Niederhaus of Princeton, Scott Stalbaum of Rochester and Lane Custer of West Lafayette.